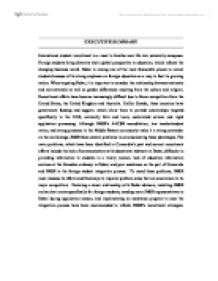 Dubai is among one of the most favourable places to recruit students because of its strong emphasis on foreign education as a way to fuel its growing nation.

EXECUTIVE SUMMARY International student recruitment is a must to breathe new life into university campuses. Foreign students bring diversity and a global perspective to education, which reflects the changing business world. Dubai is among one of the most favourable places to recruit students because of its strong emphasis on foreign education as a way to fuel its growing nation. When targeting Dubai, it is important to consider the relationship between nationals and non-nationals as well as gender differences resulting from the culture and religion. Recruitment efforts have become increasingly difficult due to fierce competition from the United States, the United Kingdom and Australia. Unlike Canada, these countries have government funding and support, which allow them to provide scholarships targeted specifically to the UAE, university fairs and tours, customized service and rapid application processing. Although JMSB's AACSB accreditation, low teacher/student ration, and strong presence in the Middle-Eastern community make it a strong contender on the world stage, JMSB faces several problems in communicating these advantages. The main problems, which have been identified in Concordia's past and current recruitment efforts include the lack of communication with educational advisors in Dubai, difficulty in providing information to students in a timely manner, lack of education information services at the Canadian embassy in Dubai, and poor assistance on the part of Concordia and JMSB in the foreign student integration process. To mend these problems, JMSB must reassess its efforts and find ways to improve problem areas that are uncommon to its major competitors. Fostering a closer relationship with Dubai advisors, installing JMSB online chat rooms specifically for foreign students, sending more JMSB representatives to Dubai during application season, and implementing an assistance program to ease the integration process have been recommended to refresh JMSB's recruitment strategies. CONTENTS 1. EXECUTIVE SUMMARY II 2. INTRODUCTION 1 3. INTERNATIONAL BUSINESS 2 - What is international business in respect to education? 2 - Why should JMSB consider doing international business? ...read more.

With so many Arab restaurants and stores at such close proximity to Concordia, Emad Mehzen, a JMSB international student from Dubai explains: "Where I live (...) is very Arabic. Everyone's close, everyone knows each other (...) That's like a relief... Like back home" 21 In addition to McGill, other Canadian schools that surveyed subjects said to have applied to are: the University of Toronto, Queens, Carleton, York, Ottawa University, and UBC. When asked why they chose Concordia, students claimed that they were drawn to its Middle Eastern Community Presence and Montreal's city life22 (Appendix I, Table 1). 2. The Competition Abroad In addition to competing with other Canadian schools, JMSB must also measure up against universities established in the United States, the United Kingdom, Australia, Germany, as well as other Middle Eastern countries23. The following map, highlights how the main competition countries ranked based on two essential decision criteria -safety and amount of assistance throughout application process. Although Canada is considered one of the safest and most welcoming countries, it has a lot of improvement to make in terms of assisting students throughout the application process. What are the competition's recruitment strategies? 1. Scholarships According to the UAE Market Report, the UK, US, France, and Australia offer government sponsored scholarships, as well as scholarships offered by companies and institutions specifically reserved for UAE students. Canada, however, does not offer scholarships particularly targeted towards them24. As UAE students appreciate personalized attention, scholarships that show special interest in their community make them feel wanted and welcomed. Having no such program available in Canada puts the country at definite disadvantage. 2. Tours25 The following is a list of tours hosted respectively by the US, UK, and Australia that have been organized in addition to their participation in to the Dubai's annual university fair: * Linden Tours: a group of American universities tour the Gulf * British Education Fairs: The British Council invites 30 British institutions * Australian Education Fair: a group of 20 institutions tour Dubai and Abu Dhabi Although Canada also sends university representatives to Dubai's annual university fair, there are no exclusive Canadian tours. ...read more.

Integration Based on our research, the most important criteria on which Dubai students base their decision, is word of mouth. This means that the recruitment process does not end at recruitment. In fact, ensuring that Dubai students integrate easily and have an overall good experience at the school is a crucial element in creating favourable word of mouth for the school. Therefore improving international student services is, in itself a marketing strategy for Dubai student recruitment. (Refer to figure 6 on the following page) Figure 6 1. PROBLEM: No assistance in regards to student establishment. SOLUTION: Implementing a student assistance program that would facilitate their establishment in Montreal. Unlike UK universities, JMSB does not have a system that arranges visa applications, housing and transportation for the foreign students before arrival to the city. Employing an agent responsible for receiving and aiding the students in managing initial activities associated with settling into a new city would make the experience more pleasurable and convenient, hence increasing favourable integration process, and word-of-mouth. Furthermore, because the City of Montreal gives every international student a free pass to the touristic venues of the city, JMSB may organize a day that all new students could go touring the city together, with Canadian students using the STM. This will help them get to know other students, as well as become accustomed to the city and its transport system. FINAL WORDS While we feel that the above recommendations are necessary to improve the current international recruitment process in Dubai, we also understand that lack of funding and government regulations will limit the extent to which some of these strategies can be implemented. Nonetheless, our research suggests that in the near future, the government will be forced to change their policies due to pressure from universities and the media, as well as the knowledge that other governments are benefiting from this type of investment. Because changes in funding may be altered in the not-so-far future, JMSB must start planning now so that their strategies will be ready when the time comes. ...read more.