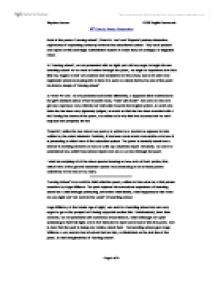 Each of the poems "Leaving school", "Dear Mr. Lee" and "Reports" portray alternative approaches of expressing contempt towards the educational system. They each present one aspect of this seemingly authoritative system in which they are unhappy or disgusted about. In "Leaving school", we are presented with an eight year old boy eager to begin his new boarding school. As we read on further through the poem, we begin to experience how this little boy begins to feel very isolated and bewildered at this school, due to its strict and regimental schemes causing him to hate it to such an extent that by the end of the poem he dreams deeply of "leaving school". In "Dear Mr Lee", we are presented somewhat differently, a supposed letter addressed to the girl's idolised author of her favourite book, "Cider with Rosie". We come to read of a girl who expresses very critically her animosity towards the English system, in which she feels she has been very rigorously judged, so much so that she has been awarded with a fail. During the course of the poem, we realise as to why this has occurred and we can't help but feel sympathy for her. "Reports", unlike the two above two poems, is written by a teacher as opposed to bein written by the actual students. Certainly, it has been made much more subtle as to how it is presenting a critical view of the education system. The poem is basically about how a teacher is advising teachers on how to write up a students report. Gradually, we come to understand how unfair these school reports can be as we read through the poem. I shall be analysing all of the above poems focusing on how each of them portray this critical view of the general education system and concluding on all of these poems collectively at the end of my essay. ...read more.

Rather, this girl is depicting that this teacher is worthless and arrogant, who doesn't strive to make lessons even remotely pleasant for them. Apparently he is completely contrary to this, and rather chooses to teach them by the standards of the formal English syllabus presented to the teachers, as opposed to simplifying it for them. This also forms one of the reasons as to why she later goes on to criticize the English syllabus. If we begin to look at this poem from the first few lines we can identify that although assumingly this poet is trying to send a formal letter to Laurie Lee, she is certainly not succeeding at doing so. What seems more apparent is that she is being very much more colloquial than needs be, by letting out all her thoughts out immediately in a stream of consciousness, rather as if she was talking to him directly face to face: "Dear Mr Lee (Mr Smart says it's rude to call you Laurie". Humorously, the poet then goes on to begin this "letter" once again after her comment in parenthesis; presumably this can be interpreted as her not wanting to stick to the conventions of formal letter writing taught to her by her teacher. Else, she may not know how to, or even have never been taught so. Whatever the reason is, the idea is further enhanced when we realise that the whole lengthy letter is one whole long sentence, with only commas used to try to split it up. This could certainly signal one possibility as to why she failed her English exam. The poet then goes on introduce her feeling of deep contempt to firstly her teacher Mr. Smart, and then secondly on to William Shakespeare. It is to such an extent with Shakespeare, that she exaggeratedly describes him as "a national disaster" because of how uninteresting and especially unamusing she finds his plays. ...read more.

Certainly, the most effective poem I found has to be "Dear Mr. Lee" which presented a perspective with much originality and heartfelt emotions. This perspective can be shared with the 'voice' of the poem that failed the English exam. Presumably, this is because it is easy for me to identify with this adolescent girl's projected feelings which may be shared with many other people as well. Not only that, but she depicts how sometimes we can encounter some teachers that have no appreciation for level of intellect, ability, understanding and aspiration of students. The poet, whether it is her persona or not, has also certainly succeeded in giving a very critical and sombre feel of school and the qualification system in general more than the other two poems. I believe that "Dear Mr. Lee" is more critical than the other two for reasons. Firstly, although in "Leaving School" we feel very disheartened and empathetic towards Williams for being prematurely ascribed to adulthood and being sent to a boarding school, we have not really conjured the aspect of him being critical of all schools but rather specifically of that one boarding school. Indeed therefore, the blame is directed towards that boarding school and perhaps his parents for exaggerating his apparent maturity. Secondly, the poem "Reports" really only gives a general critical view, focusing on school reports and how unfair they can be. However, in "Dear Mr. Lee" the critical aspect of school has been given in numerous cases with real life results. The girl has been let down by her teacher not only by poor teaching, but by ruining her aspirations; she has also been subject to what she feels a rigorous way of judging her English capability that resulted in her failing. She therefore has been very critical of both how poor the quality some teachers can be as well as being critical of how the qualification system chooses to asses people in English, which reflects what I and undoubtedly what many others may also believe. Maytham Aomran GCSE English Coursework 20th Century Poetry Comparison - Page 1 of 8 - ...read more.