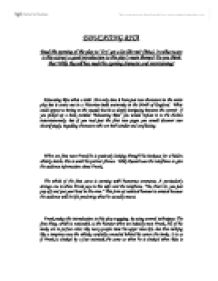 Educating Rita - Read the opening of the play to 'D y' get a lot like me? (Rita). In what ways is this extract a good introduction to the play's main themes? Do you think that Willy Russell has made his opening dramatic and entertaining?

EDUCATING RITA Read the opening of the play to 'D y' get a lot like me? (Rita). In what ways is this extract a good introduction to the play's main themes? Do you think that Willy Russell has made his opening dramatic and entertaining? Educating Rita what a title! Not only does it have just two characters in the entire play but it starts out in a Victorian-built university in the North of England. What could appear so boring on the outside but be so deeply intriguing between the covers? If you picked up a book entitled "Educating Rita" you would replace it to the shelves instantaneously, but if you read just the first two pages you would discover two electrifyingly, beguiling characters who are both similar and conflicting. When we first meet Frank he is patiently looking through his bookcase for a hidden whisky bottle, this is until his partner phones. Willy Russell uses the telephone to give the audience information about Frank. The whole of the first scene is teeming with humorous comments. A particularly strange one is when Frank says to his wife over the telephone, "Yes, that's it, you just pop off and put your head in the oven." This form of satirical humour is comical because the audience will be left pondering what he actually meant. Frank makes the introduction to this play engaging, by using several techniques. ...read more.

"These women, you see, they come to the hairdressers cos they wanna be changed. But if you wanna change y' have to do it from the inside, don't y'?" Rita thinks that by changing her life and becoming an "educated woman" she would become happier. Rita changed her name from Susan thinking it would make her different, but now she has just found something else that she feels needs modifying. Rita is unable to respond to Frank's polite, formal questions about her name. This reflects her informal nature and her distance from Frank's academic world. Frank and Rita do have more in common than we first realize at the beginning of the play. It is outstanding how similar they really are. Frank loves the life that Rita has, but Rita desires what Frank has. In Rita, we see a woman who "wants to change" and is driven by a sense of incompleteness. She struggles for an education, which will take her beyond the class from which she was born into. Before committing herself to an Open University course, she had to decide, "whether it's gunna be another change of dress or a change in yourself." Willy Russell uses Rita, as a teaching aid to get the point across that no matter how you dress yourself up; it is still the inner person that counts and the way you feel about yourself. ...read more.

The fact that Rita says this alone is amusing and gives us an immediate insight into her character. We also learn from Frank that in a way he is relatively shy, he cannot reply directly to Rita's observation; in a shocked manner all he can say is "erm...probably." Rita's observation about the picture foreshadows the way she will make Frank appreciate things that he has grown bored of and taken for granted. She has very original ideas but Frank fears that by becoming "educated" she will lose the innocence and freshness and change for the worse. Educating Rita was written with intent to be performed. Rita moves around the study rather than sitting down. She is very observant of the things around her. She prepares us for her restlessness and inability to concentrate, but also her quickness of mind and curiosity. The way that Rita walks around the study will keep all eyes constantly focused on her and what she is doing. As an audience to the play, it is interesting watching the characters and how they develop throughout the performance. Because the play only has two characters it is fascinating because each and every part of their personality is explored. The opening scene is made dramatic because of contrast. Both Rita and Frank are total opposites educationally, culturally, socially and emotionally. They have totally different opinions about everything, which provides humour. The play is also dramatic because of how the theme of "opposites attract" is sustained throughout the entire play and used to full advantage. ...read more.