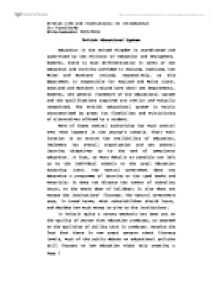 Education in the United Kingdom is coordinated and supervised by the ministry of Education and Employment.

Education in the United Kingdom is coordinated and supervised by the ministry of Education and Employment. However, there is much differentiation in terms of the education and training provided in England, Scotland, the Wales and Northern Ireland, respectively, as this department is responsible for England and Wales alone. Scotland and Northern Ireland have their own departments. However, the general framework of the educational system and the qualifications acquired are similar and mutually recognized. The British educational system is mainly characterised by great its flexibility and multiplicity of alternatives offered to a student. None of these central authorities has much control over what happens in the county's schools. Their main function is to ensure the availability of education, implement its overall organisation and set general learning objectives up to the end of compulsory education. In fact, as many details as possible are left up to the individual schools or the Local Education Authority (LEA). The Central government does not determine a programme of learning or the used books and materials; it does not dictate the number of schooling hours, or the exact days of holidays; it also does not manage the institutions' finances. ...read more.

Once again decentralisation persists: in fact, there are three different national curricula, one for England and Wales, another for Scotland and another for Northern Ireland. Another major change was that now schools could "opt-out" of the control of the LEA and work directly under the control of the appropriate government department. The introduction of the national curriculum was also intended to emphasise more "the three R's" (reading, writing and arithmetic) at primary level, and science and technology at higher levels. Compulsory education in Britain is divided into two different stages: primary education from 5 to 11 and secondary education from 11 to 16. At primary school students are tested in their progress in reading, writing and mathematical skills. Pupils wishing to progress to Secondary Schools, particularly in the independent sector are required to pass an Entrance Examination. Even though education is only compulsory until the age of 16, many secondary schools offer education until the age of 18. Students who complete secondary education may optionally take the examination for the General Certificate of Secondary Education (GCSE). Those students wishing to pursue University studies attend school until the age of 18 and then take the Advanced level public examinations (A level - AS level) ...read more.

A year ago Charles Clarke, the education secretary, made it clear that the 50% target was being quietly dropped and that the important thing was to make university available to academically able young people from all backgrounds. Charles Clarke also admitted that universities cannot flourish without intellectual elitism, elite to which not all can belong. On January, 2004, the government published the Higher Education bill on student finance. According to this bill, the poorest 30 per cent of full time students will be guaranteed at least �3000 per year to help them through their studies. As there is no internationally agreed definition of what a university is supposed to do, it is hard to conclude that Britain's top universities are falling behind their international counterparts. Teaching and the creation of wealth are regarded as part of any definition, but it is difficult to compare Britain's single-subject approach with other countries' universities modular education; and British universities still attract outside investment and students. However, the fact is that Britain's top-level research is diminishing. The number of Nobel prizes in chemistry, physics and medicine has fallen from eleven in the 1960s to two in the 1990s. To sum up, Britain's educational system is struggling between egalitarianism and elitism Page 2 British Life and Institutions: An Introduction Dr: Tuschinsky Wintersemester 2003/2004 British Educational System Page 1 ...read more.