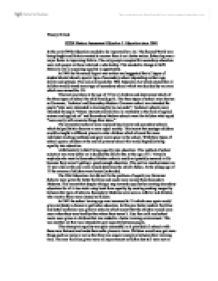 Wesley Pollard GCSE History Assessment Objective 1: Education since 1940 In the early 1940s Education needed to be improved by a lot. The Second World was being fought and Britain wanted to recover from it as a better nation. Schooling was a major factor in improving Britain. The only people accepted for secondary education were rich people or those who had a scholarship. This needed to change to fulfil Britain's aim in acquiring equality in opportunity. In 1943 the Norwood Report was written and suggested that all types of student should attend a special type of secondary school depending on their age, ability and aptitude. This led on towards the 1944 Education Act which stated that all children would attend some type of secondary school which was decided by an exam which was named the 11+ This test was taken at the age of 11 by all children and determined which of the three types of school the child would go to. The three types of school were known as Grammar, Technical and Secondary Modern. Grammar school was intended for pupils "who were interested in learning for its own sake", Technical schools were intended for pupils "whose interests and abilities lie markedly in the field of applied science and applied art" and Secondary Modern schools were for children who coped "more easily with concrete things than ideas." ...read more.

It was extremely unfair to Secondary Modern children who had lost out on their lives at the age of 11. Secondary Modern pupils felt like they had failed in life and the schools they went to didn't have the facilities of the grammar schools. This meant that the intentions of the 1944 Education Act were not fulfilled and meant for a big change to come about. That change was the switch to comprehensive schools. These schools would teach children of all abilities under one roof which meant that all pupils would get equal opportunities and facilities. This was a major step forward in terms of equality and greatly improved on the ways of the 11+. Now instead of being labelled at 11 pupils now had the chance to succeed and get complete education no matter how well they performed. This idea of everybody being equal was always going to be a great thing but it would also have some disadvantages. The parents of children who went to Grammar school weren't happy with the change as you would expect. The thing they thought was why change something that works for something clearly worse. This meant that the children who previously went to Grammar school would not get as good teaching as they did before. There would be much more people in each school meaning that the teachers wouldn't be able to concentrate on individual pupils in the way they did before. ...read more.

This now meant that people from the working class could acquire good exam results and better jobs than before. The one thing remaining though was the fact that the GCE O-level grade was better than a CSE grade but things were about to change. Since the early 1970s exams were being tested for the whole ability range. Later on the Schools' Council decided on making a common 16-plus examination in History, and in Science and the examining boards issued most able clients with duel certificates. In 1986-1988 the GCE and the CSE were united to form an exam that covered all abilities: The GCSE. This exam was to be taken by all secondary school students at the age of 16 and everybody was given the chance to succeed in it if they put the effort in. The GCSE created complete exam equality as now everybody did the same exam for every subject meaning that you didn't take a different exam depending on your class, race, gender or anything else like that. This exam was taken by everybody at the age of 16 meaning that exams had finally reached true equality. The GCSE was a great success and has now made a significant impact on the equality of the classes. Every grade a person gets is treated as its actual grade by employers and universities now rather then the type of exam it is. This exam has created a lot of opportunity for young people and is still being used to this very day. ...read more.