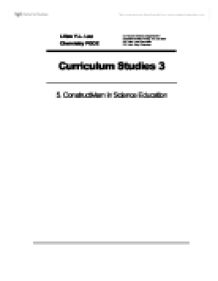 Educational psychology has changed significantly over the 20th century.

Lilian Y.L. Lau Chemistry PGCE Curriculum Studies Assignment 3 Submission date: Friday, 1st June 2001 CS Tutor: John Parkinson PS Tutor: Sally Chapman Curriculum Studies 3 5. Constructivism in Science Education 1.0 Introduction & Theoretical Background 1.1 General Theoretical Ideas Educational psychology has changed significantly over the 20th century. Early investigations of children as learners and the impact of different kinds of teaching approaches were largely characterized by attempts to identify general and consistent characteristics. The approaches used varied considerably. Jean Piaget, for example, recorded the development of individuals in detail, assessing changes with age and experience. Others, such as Robert Gagn�, focused on the nature of teaching and learning, attempting to lay down taxonomies of learning outcomes. Alfred Binet and Cyril Burt were interested in methods of assessing children's development and identifying those children considered to be of high or low general intelligence. The following diagram by Adey and Shayer (1994) helps to summarise the development of learning theories. Theories developed during Vygotsky's career (~1917) practiced the behaviourist model e.g. Pavlov's Dog. In Vygotsky's opinion, none of these theories succeeded in developing a complete description or explanation of higher psychological functions in terms acceptable to natural science. Vygotsky was not able to accomplish these goals, however he was able to provide an intelligent and precursory analysis of modern psychology (Cole, 1978). His theory as a whole could be described as rather complex but there are three underlying themes that could be summarised as follows: (Lefrancois, 1994) 1. Importance of culture. 2. The central role of language. 3. Zone of proximal growth or development. The latter point in Vygotsky's theory suggests that children or students can be guided by explanation, demonstration, and work. They can attain to higher levels of thinking if more capable and competent adults guide them. This conception is better known as The Zone of Proximal Development (ZPD). The Zone of Proximal Development is the gap between what is known and what is not known, that is, generally higher levels of knowing. ...read more.

Some pupils (18% at age 11) held an active ear model, in which their most important factor in hearing is that the listener is concentrating on the source of the sound. Generally, the older pupils gave the more scientific response (~80%) 2.0 School-focused study I teach two Y8 groups (Middle band and upper band) and they both have science 3 times a week. For this essay I will focus on the Top Band science group. They follow Spotlight Science course, which is a spiral curriculum. The department has adapted it and the Scheme of Work reflects the need of prerequisite knowledge and builds foundations in Y7 and 8. Aspects that require higher cognitive ability to understand are used in Y9. During Y9, the pupils have subject teachers (Biology, Chemistry and Physics) and they revise previous work, adding on more difficult work to complete the course. Shifting away from a spiral curriculum was necessary because pupils were frustrated at covering similar topics again and again. 2.1 My own findings A copy of the SoW and lesson plans are in the appendix. I will follow the flow of lessons and summarise my findings. The introduction to the topic was important in assessing what they already knew or what they thought about vision. Firstly they were introduced to the eye and they investigated how the eye (pupil) reacts to darkness and brightness. Then they were given a problem of how two girls think they see a book. They were asked which girl's hypothesis is correct. I allowed the pupils's the opportunity to jot down their own 'vote' for Tina or Emma in the back of their books. I expressed that they will not be judged on their vote and there was a show of hands for or against each idea. I did not stress too much for all pupils to vote because they maybe shy and cautious of failure. ...read more.

This is true for some topics in science, many models just has to be accepted rather than explained e.g. charges of particles. Most topics in KS3 are researched by Driver (1994) to produce her package of support materials for secondary science. For the science teacher, this is an essential resource to know what could be taught by a constructivist method. CASE is a project derived from Piaget's theories that pupils should educate each other to formulate their equilibrium. I am more comfortable with Vygotsky's theory that teachers need to intervene. It is a shift from personal construction to social construction. The teachers are their social constructors and essential in checking they are learning the 'right' science and to prescribe activities that challenge misconceptions. It is dangerous to think that constructivist teaching will solve all misconceptions. When teaching to the National Curriculum, time is an expensive resource. It will help most pupils, but some pupils may need longer periods of time for challenge and reflection to reach the scientifically correct meaning. It maybe argued how deep their misconceptions are and how their culture affects it. When teaching in a mixed ability and multicultural society, some pupils will need constructivist teaching more than others. It is sensible to choose constructivist teaching at major target areas where the majority of pupils have misconceptions, to use curriculum time more effectively. It would be fruitful to consider if it is more beneficial in the long term to understand a topic well. For example, an understanding of circuits is very beneficial since it is applied in their GCSE's. In conclusion, there is a place for constructivist ideas in teaching though teachers have to be selective to make the most out of constructivist teaching. I have tried to do so and my downfall is that I haven't given pupils the chance to test out their new knowledge thoroughly and reflect on their previous misconception to disprove it. It is essential that all aspects of constructivist be followed teaching for it to be effective. 2 PAGE 13 OF 13 2 PAGE 2 OF 13 ...read more.