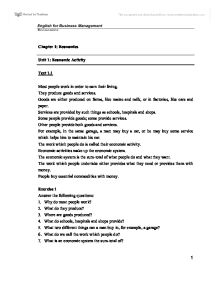 Chapter I: Economics Unit 1: Economic Activity Text 1.1 Most people work in order to earn their living. They produce goods and services. Goods are either produced on farms, like maize and milk, or in factories, like cars and paper. Services are provided by such things as schools, hospitals and shops. Some people provide goods; some provide services. Other people provide both goods and services. For example, in the same garage, a man may buy a car, or he may buy some service which helps him to maintain his car. The work which people do is called their economic activity. Economic activities make up the economic system. The economic system is the sum-total of what people do and what they want. The work which people undertake either provides what they need or provides them with money. People buy essential commodities with money. Exercise 1 Answer the following questions: 1. Why do most people work? 2. What do they produce? 3. Where are goods produced? 4. What do schools, hospitals and shops provide? 5. What two different things can a man buy in, for example, a garage? 6. What do we call the work which people do? 7. What is an economic system the sum-total of? 8. What two things can work provide for the worker? Exercise 2 Change these sentences in the same way as the example. Both sentences refer to future possibilities. Example: Perhaps he will come. He may come. 1. Perhaps he will buy a car. 2. Perhaps we shall want some more fruit tomorrow. 3. Perhaps they will get the essential commodities soon. 4. Perhaps the service will stop next month. 5. Perhaps the garage will not sell that car to him. 6. Perhaps the economic system belongs to a city, a whole country or the whole world. 7. Perhaps the car does not belong to those people. 8. Perhaps he will buy some service which will help him maintain his car. ...read more.

You will also need the word nation itself. Stem Suffix 1 2 3 Nation al ize d ation ism ist ic a. The USA is the homeland of the American _________. b. Most countries have _________ banks, such as the Bank of England. c. The Socialist Party has plans to _________ various privately owned industries. d. British Rail is already a ________ industry, because it is publicly owned. e. The name given to the change from private to public ownership is ______ ____. f. In the last twenty years ________ has been a strong political force leading to the information of many new nations. g. A person who is interested in the progress and history of his own country may be called a ________. h. Many governments have certain policies which are not international but simply ________. Text 3.2 No state today is completely communistic; no state is completely capitalistic. The various national economic systems tend generally toward one type or the other, but many systems are difficult to classify. It has been found necessary in many countries, even in such dedicated strongholds of free enterprise as the USA, to control or regulate national economic conditions. The under-developed countries of the world are inevitably interested in control long-term plans guided by the government. Indian has had a number of plans guided by the government. India makes a clear distinction between the public sector and the private sector of its economy. Systems of this type are sometimes called mixed economies. Britain nowadays has a mixed economy. In the public sector, British economic lives are the nationalised industries like coal, steel, British Rail and BOAC. In the private sector are the majority of the nation's industries, both large and small, from giants like ICI and BP to small family businesses. In 1962 the government set up an official planning body to guide national economic policies. This body is known as the National Economic Development Council. ...read more.

g. Stable condition led to an improvement in the general state of the economy. h. The government encourages new commercial enterprises. i. A change in government usually means a change in policy. j. The minister wanted to make a fundamental change in the national economic policy. Text 5.2 Elasticity of supply, as a response to changes in price, is related to demand. Economists define "demand" as a consumer's desire or want, together with his willingness to pay for what he wants. We can say that demand is indicated by our willingness to offer money for particular goods or services. Money has no value in itself, but serves as a means of exchange between commodities which do have a value to us. People very seldom have everything they want. Usually we have to decide carefully how to spend our income. When we exercise our choice, we do so according to our personal scale of preferences. In this case of preferences essentital commodities come first (foods, clothing, shelter, medical expenses etc.), then the kind of luxuries which help us to be more comfortable (telephone, special furniture, insurance etc.), and finally those non-essentials which give us personal pleasure (holidays, parties, visits to theatres or concerts, chocolates etc.). They may all seem important, but their true importance can be measured by deciding which we are prepared to live without. Our decisions indicate our scale of preferences and therefore our priorities. Elasticity of demand is a measure of the change in the quantity of a goods, in response to demand. The change in demand results from a change in price. Demand is inelastic when a goods is regarded as basic necessity, but particularly elastic for non-essential commodities. Accordingly, we buy basic necessities even if the prices rise steeply, but we buy other things only when they are relatively cheap. Exercise 1 Answer these questions, basing your answers on the text. 1. What is elasticity of supply a response to? 2. What is the definition of "demand"? 3. How is demand indicated? 4. What is money? 5. What do we do when we exercise choice? 6. ...read more.