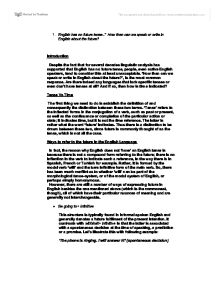 English has no future tense. How then can we speak or write in English about the future?

'She is going to have a baby!' (she is already pregnant) * Present Progressive Present Progressive can have a future meaning, which resembles that of be going to, although there is a slight difference: here we do not have a present intention or cause, but rather a present, fixed arrangement or plan, as in the example: 'I am flying to Paris next week.' (an arrangement already made) or 'He's not coming with us, is he?' At this point we should address the fact that since we are talking of a 'fixed arrangement', we cannot be referring to the distant future, so, Present Progressive is usually associated with a sense of immediacy; something is going to take place in the near future. V * Present Simple When the Present Simple is used to mark future reference, then there is usually a sense of future as being a fact conveyed; an event will occur and this can hardly change: 'We set off tonight.' ...read more.

In answer to this, we can refer to Finnish, where the future tense does not exist either and the present perfect is used instead. Chinese is another outstanding example, where no tenses are used whatsoever and future time is indicated by auxiliary verbs or time expressions. In fact, the reason why English lacks future tense is partly because when early grammarians sat down to write the first grammars of English, they took Latin as the model, and then filled in the categories that worked for Latin with their nearest English equivalents. Conclusion To sum up, it should definitely not be surprising that different languages vary as to how many tenses, if any, they have. Each language follows different sets of rules, which is what makes them distinct. It is not even necessary that we divide time up into past, present and future, but should the case be such, it is not logically necessary to express this distinction through tense, and this is something we attempted to shed light on in this essay through the analysis of the way future time is marked in the English Language. ...read more.