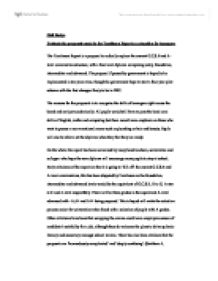 Gail Rudge Evaluate the proposals made in the Tomlinson Report on education for teenagers The Tomlinson Report is a proposal to radically replace the current G.C.S.E and A-level examination structure, with a four level diploma comprising entry, foundation, intermediate and advanced. The proposal if passed by government is hoped to be implemented in ten years time, though the government hope to start a four-year pilot scheme with the first changes likely to be in 2007. The reasons for the proposals is to recognise the skills of teenagers right across the board and not just academically. ...read more.

Early criticisms of the report are that it is going to 'kill off' the current G.C.S.E and A-level examinations, this has been disputed by Tomlinson as the foundation, intermediate and advanced levels would be the equivalent of G.C.S.E, D to G, A-star to C and A-level respectfully. There will be three grades in the equivalent A-level advanced with -A,A+ and A++ being proposed. This is hoped will make the selection process easier for universities when faced with a selection of pupils with A grades. Other criticisms have been that scrapping the exams could leave employers unsure of candidate's suitability for a job, although they do welcome the plans to drive up basic literacy and numeracy amongst school leavers. ...read more.

believes, "for the sake of our children we need to concentrate on the things that really matter, and which can perfectly well be achieved within the existing framework :better teaching, more rigorous exams, more demanding syllabuses and better vocational courses." I think it is fair to say that we do need some system to cater for all pupils and to take into account what their future aspirations might be. I cannot see anywhere if they have asked the pupils taking the exams what they think and how do they think the system could be improved. I think a diploma could work if it is constructed right, it would be a shame to see pupils segregated further which I have seen happen already in everyday life just because they are not academic. ...read more.