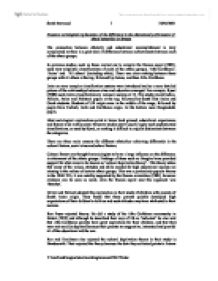 Examine sociological explanations of the difference in the educational performance of ethnic minorities in Britain The connection between ethnicity and educational accomplishment is very complicated as there is a great deal of difference between achievements between each of the ethnic groups. In previous studies, such as those carried out to compile the Swann report (1985), used very simplistic classifications of each of the ethnic groups, 'Afro-Caribbean', 'Asian' and 'All others' (including white). There was clear ranking between these groups with all others at the top, followed by Asians, and then Afro-Caribbean. Later on more complex classification systems were introduced and so a more detailed picture of the relationships between class and education emerged. For example, Kysel (1988) used eleven classifications to measure success at 16. This study placed Indian, African, Asian and Pakistani pupils at the top, followed by South East Asian and Greek students. Students of UK origin came in the middle of the range, followed by pupils from Turkish, Arab and Caribbean origin. ...read more.

Their rejected the theory because the data they collected points to Asians achieving highest at school and yet their parents go into school the least, indicating that they are not as interested as Afro-Caribbean parents who go into school the most. In spite of their parents frequent visits to school Afro-Caribbean are achieving the least in school. Another important theory is cultural difference theory, this about children being disadvantaged because their culture differs from the schools, the main example of this is if a child go to an English speaking school and speaks a different language at home, this means that they will not be as practiced as the children for whom English is their first language, they will be subjected to constant correction by teacher and their confidence and self esteem may suffer as a result. This theory is rejected by Driver and Ballard who found that by sixteen Asian children's command of English is at least as good as their class mate, and in some cases, much better. ...read more.

Coard said that institutional racism lead to ethic minority children having self-esteem problems, which developed into low achievement. This is extremely apt with Afro-Caribbean students who are seen as 'a threat to classroom management' and because they have been treated like this they start to conform to the labels they have been given. The DfEE found in a recent study that Afro-Caribbean pupils were four times more likely be permanently excluded from school than white children. To conclude, the area of ethnicity is a very delicate one and it is important to view it in the context of individuals and not stereotype people. More research is needed in to the experience of small, specific racial groups, not just 'Asian' or 'White'. It is also important to note that it can never be seen as just one factor, it is always going to be a combination of factors and also age and gender can not be ignored, no one factor can never be measured accurately on its own. Sarah Harwood 1 10/05/2007 A:\Examine sociological explanations of the difference in the educational performance of ethnic minorities in Britain.doc ...read more.