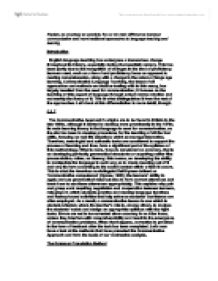 Explain, as concisely as possible, five or six main differences between communicative and more traditional approaches to language teaching and learning.

Explain, as concisely as possible, five or six main differences between communicative and more traditional approaches to language teaching and learning. Introduction English language teaching has undergone a tremendous change throughout its history, especially during the twentieth century. This has been partly due to the recognition of changes in the kind of proficiency learners need, such as a rise of oral proficiency focus as opposed to reading comprehension, along with a change in the nature of language learning. Communicative Language Teaching, the latest of all approaches and methods we shall be dealing with in this essay, has largely resulted from the need for communication; it focuses on the teaching of this aspect of language through actual communication and not merely the theory of it. This is what distinguishes it from the rest of the approaches. Let's look at this differentiation in more detail, though. C.L.T The Communicative Approach's origins are to be found in Britain in the late 1960s, although it started to develop more prominently in the 1970s. Its main learning theory is that language is used for communication, so the aim has been to develop procedures for the teaching of all the four skills, focusing on real-life situations which encourage interaction, Therefore, meaningful and authentic tasks are considered to support the process of learning and thus, form a significant part of the syllabus of this methodology. ...read more.

Furthermore, much emphasis is given to grammar rules, which, unlike C.L.T., are taught deductively; that is, their presentation and analysis come first and are then followed by drilling. The Communicative Approach, on the other hand, favours the inductive method in the teaching of grammar, where the rules of new structures are induced from the way the form is used in a situation. In addition, in Grammar-Translation Method the medium of instruction inside the classroom is almost always L1, which comes in total contrast with the Communicative Approach, where L1 is not at all encouraged. Finally, accuracy is emphasised, as opposed to fluency; students are expected to attain high standards in translation, which leaves no room for grammatical or vocabulary mistakes. The Direct Method The Direct Method originated in France in 1801. It is based on the theory that second-language learning must resemble first-language learning (natural approach). It shares a common characteristic with C.L.T. in that it focuses on the speaking skills of a language. However, there are distinct differences between the two. First of all, the Direct Method does not promote the student's role as a negotiator and improviser like C.L.T. does, rather, it is believed that learners should see the teacher as ideal language model and commander of classroom activity; thus, the notion of 'communicative competence' as developed by Hymes is not implemented. ...read more.

It states that language learning is a process of mechanical habit acquisition, which can be achieved repeating and memorising dialogues and grammatical structures. Phonological and grammatical accuracy, as opposed to vocabulary mastery, is regarded as crucial. Consequently, no focus is given on fluency and authentic production of language. As the American linguist Noam Chomsky argued 'sentences are not learned by imitation and repetition but ''generated'' from the learner's underlying competence.'(Chomsky, 1966). The above quotation perfectly illustrates the basic difference between the two approaches, the second of which came to emerge as a reaction to the first. What is more, here L1 plays an important role, since the syllabus has been determined upon its differences with L2. There is a contrastive analysis performed between the two, which is in contrast with the C.L.T., where L2 is seen as a distinct, independent language with its own autonomous rules and formations. Conclusion To sum up, what we have come to see is that Communicative Language Teaching emphasises interaction as not only the means but the ultimate goal of language learning as well, more than any other approach dealt with in this essay. Without doubt, there are methods with which it shares more common characteristics than others, however, the communicative element and the extent to which this is stressed is what distinguishes this approach from the rest. ...read more.