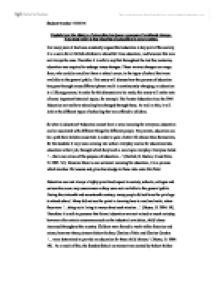 Explain how the history of education has been a process of continual change. You must refer to key theories of education in your answer.

Explain how the history of education has been a process of continual change. You must refer to key theories of education in your answer. For many years it has been constantly argued that education is key part of the society, it is a norm for all British children to attend full time education, and however this was not always the case. Therefore it is safe to say that throughout the last few centuries; education was required to undergo many changes. These various changes can range from, who could or could not have a school career, to the types of school that were available to the general public. This essay will discuss how the process of education has gone through many different phases and it is continuously changing, as education is a lifelong process. In order for this discussion to be made, this essay will make note of some important historical topics, for example The Forster Education Act, the 1944 Education act and how schooling has changed through these. As well as this, it will look at the different types of schooling that was offered to children. So what is education? Education cannot have a same meaning for everyone; education can be associated with different things for different people. For parents, education can be a path their children must take in order to gain a better life chance than themselves, for the students it may mean coming into school everyday and as for educationalists, education is their job, through which they teach a new topic everyday. Everyone holds '... their own views of the purpose of education...' (Bartlett, S. Burton, D and Peim, N. ...read more.

The act would mean that ratepayers of each borough could petition for the Board of Education to run investigations on education provisions in their local area. If it was deemed that schools had a shortfall between results and the number of students that were attending a school board would be set up. These boards would provide education to all children between the ages of 5 and 12; this can be seen as a massive movement towards the current system of free education, as it was not discriminative between sex and class though education was still not free at this point school boards did make concessions, the poorest children would have the school fees paid for them. However, attending these schools was not mandatory for students. On the other hand, these Acts, like many other social reforms during the period, was divided and lacked a central movement. A lot of the time terms of the act were left to the discretion of municipal governments who could make bylaws according to what they felt was necessary, for example some local boards made it so that education within their area was compulsory. Though it can be said that there was evidence that such terms were spreading through the country, by 1873 40% of the population lived under compulsory education, it can be argued that a centralised movement would have had a bigger impact to educating Britons. Another major shortcoming of the act was that the lack of centralisation meant that there were inequalities in the quality of education; different areas had more or less access to education. An example would be that while industrial areas had many boards within one area rural areas had substantially less, a lot of the time this meant that a whole area would have only one school board. ...read more.

The comprehensive schools provided education that covered aspects that were taught in the grammar and technical schools. Consequently the pressure on students performing well in their 11-Plus examination was not stressed upon them. As a result of this, comprehensive schools found themselves catering for many students of different abilities and skills, and parents did not need to worry about sending their children to schools that catered for their needs. '...no longer encouraged to attend a school offering specialist courses to meet his needs;' (Vigars, R 1977). This shows that comprehensive schools were providing education for students with different needs and therefore, sending them to specialists school were not a necessity. To conclude this essay, the process of education has been of a constant change. As this essay has outlined the different Education Acts and how each Act has implemented on the teaching and learning of education, it has also understood the different types of schooling that were available from before the 1800 up until the 1944. The history of education has is always been changing within society. As society changes, the education system has changed in order to cater for each and every pupil. Word Count: 2,764 Reference List Bartlett, S. Burton, D and Peim, N. (2001) 'Introduction to education studies', Paul Chapman: London Hayes, D. (2006) Chapter 7, 'Schools and classroom' citied in, Sharp, J, Ward, S and Hankin, L. (editors) (2006) 'Education Studies' Exeter Bartlett, S & Burton, D (2007) 'Introduction to Education Studies', SAGE: London Vigars, R. (1977), cited in, Cox, C.B. & Boyson, R. (eds.) (1977) 'Black Paper 1977', Maurice Temple Smith Ltd: London. Murphy, J. (1972) 'The Education Act 1870 Text and Commentary', David & Charles Limited: Newton Abbot. Dent, H. C. (1944) 'The Education Act 1944', University of London Press: London. Student Number: 0734776 ...read more.