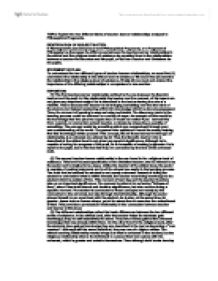 The person who explained it would be merely helping find this knowledge within yourself. This concept, like all those learned in this type of relationship, is a universal one shared by all. Thus the Socratic teacher who is described at the ethical level is not given any special significance. Although he is capable of noting the progress of the pupil, he is incapable of making judgments. He is equal to the pupil, due to the fact that they are connected by the idea of the universal truth. (2) The second teacher-learner relationship is the one found in the religious level of existence. This level focuses specifically on the Christian teacher, who is referred to as the savior and is implied to be Jesus. ...read more.

This provides a paradoxical relationship in the connection between teacher and learner at this level. (3) The different relationships reflect the basic differences between the two different levels of existence. In the ethical level, after the teacher helps the students gain knowledge, they are still essentially the same. They have merely gained the universal knowledge that was already within them. On the other hand in the religious level, after the students have gained knowledge they are described in the text as becoming a "new creature". Although still the same individual, they are now of a higher caliber. The ethical teaching relationship merely brings out what is universal in the student, but the religious relationship allows the individual to connect their own selves with the universal, which is greater and outside themselves. Thus although both levels develop the pupil, it is the religious one which truly spurs the student on to the higher knowledge and insight. ...read more.