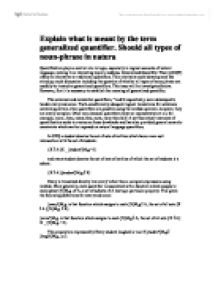 Explain what is meant by the term generalized quantifier. Should all types of noun-phrase in natura

Explain what is meant by the term generalized quantifier. Should all types of noun-phrase in natura Quantification plays a central role in logic, especially in logical accounts of natural language, making it an interesting topic to address. Generalized Quantifier Theory (GQT) offers an alternative to traditional quantifiers. This relatively recent development has stired up much discussion including the question of whether all types of noun phrase can usefully be treated as generalized quantifiers. This issue will be investigated below. However, first it is necessary to establish the meaning of generalized quantifier. The universal and existential quantifiers, " and $ respectively, were developed to handle every and some. Truth-conditionally adequate logical translations for sentences containing certain other quantifiers are possible using the lambda operator, however, they are overly complex. Other non-classical quantifiers have no representation at all, for example, more...than, many, few, most, more than half. A set-theoretical treatment of quantification seeks to overcome these drawbacks and has also provided general semantic constraints which can be imposed on natural language quantifiers. In GTQ a student denotes the set of sets of entities which have a non-null intersection with the set of students: {X � A | X _ [student']M,g.� 0} and every student denotes the set of sets of entities of which the set of students is a subset: {X � A | [student']M,g.� X} Every is translated directly into every' rather than a complex expression using lambda. More generally, each quantifier is associated with a function which assigns to each subset [N]M,g. ...read more.

I would like to consider definites, indefinites and quantifiers in a restricted sense in turn. Definites Russell's analysis of singular definites as denoting individuals and plural definites as denoting classes prevents a uniform analysis of definites, which behave the same syntactically and pragmatically. This can be remedied by treating all definites as terms. As will be demonstrated, from within GQT itself there is evidence against the quantifier approach to definites. Under negation definites can be shown to behave as terms. If definites are treated as terms then definite NPs should denote single individuals rather rather than classes of individuals. The definite NPs John and I correspond to single individuals. If a predicate P is false for John/I, then its negation is true, i.e. there is a global truth-value. However, for the NP the children, which, e.g., denotes three girls and two boys, there will be predicates which do not hold for all of the children, e.g. the children are girls, i.e. P is partly true and partly false, meaning that no truth value can be assigned. Compare this to the quantified proposition all children are girls, which can be assigned a truth value, namely false. If we accept truth-value gaps of this kind definite NPs in general can be treated as terms. So definite NPs denote individuals whose domain is just the true predicates together with the corresponding false predicates; whereas quantifiers with the same head noun have larger domains and also yield truth-values for all properties which hold for only parts of the head noun denotation. ...read more.

Differences can be drawn between generic and non-generic, i.e. referential quantification. Referentially quantifying sentences refer to a limited domain of quantification which has previously been established. So referential quantifiers take the denotation set of the head noun as part of a limited universe of discourse. e.g. the apples are sour Generically quantifying sentences refer to kinds of objects on a conceptual level. e.g. apples are sour Generic quantification requires virtually unlimited and inherently fuzzy denotation sets. It can also be used with respect to real classes rather than sets. The GQT format is designed to capture referential quantification, but is not appropriate for generic quantification. It appears that a notion of quantification should be prefered which involves properties instead of sets. Such a treatment would be adequate for the referential cases too. The above arguments suggest that it is not justified to treat all NPs as genuine quantifiers in the sense of GQT. Neither definites nor indefinites are quantifiers and not all uses of the remaining quantificational NPs fit the generalized quantifier scheme. A distinction between referential and generic quantification is also needed. Barwise and Cooper's (1981) approach following on from Montague (1973) in PTQ results in a broad and unspecific concept of natural language quantification, since it reads a quantificational interpretation into all NP meanings which in certain contexts can be interpreted as quantifiers. The inverse approach can be taken by trying to describe only those means of expression which are specific for quantification. Quantifiers must also be sought in ither syntactic categories. They can be expressed in various ways. The result is a conception of natural language quantification which is more specific, but at the same time applies to substantially more linguistic data. ...read more.