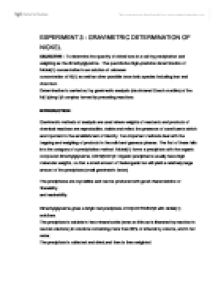 EXPERIMENT 3 : GRAVIMETRIC DETERMINATION OF NICKEL OBJECTIVE : To determine the quantity of nickel ions in a salt by precipitation and weighing as the dimethylglyoxime . The quantitative high-precision determination of Nickel(II) concentration in an solution of unknown concentration of Ni(II) as well as other possible trace ionic species including iron and chromium. Determination is carried out by gravimetric analysis (via sintered Gooch crucible) of the Ni(II)(dmg1)2 complex formed by preceding reactions. INTRODUCTION: Gravimetric methods of analysis are used where weights of reactants and products of chemical reactions are reproducible, stable and reflect the presence of constituents which are important in the establishment of identity. Two important methods deal with the trapping and weighing of products in the solid and gaseous phases. The first of these falls into the category of a precipitation method. Nickel(II) forms a precipitate with the organic compound dimethylglyoxime, C4H6(NOH)2. Organic precipitants usually have high molecular weights, so that a small amount of theinorganic ion will yield a relatively large amount of the precipitate (small gravimetric factor). The precipitates are crystalline and can be produced with good characteristics of filterability and washability. ...read more.

weight without any substance = 22.5521 g The crucible(2) weight with precipitate= 30.9905 g The weight of precipitate from crucible (2) =8.4384 g The concentration (in g L-1)of nickel (ll) ions in the solution= DISCUSSIONS: 1. Nickel is precipitated by the addition of an ethanolic solution of dimethylglyoxime (CH3-C(:NOH)-C(:NOH)-CH3, referred to in what follows as H2DMG} to a hot, faintly acid solution of the nickel salt, and then adding a slight excess of aqueous ammonia solution (free from carbonate). The precipitate is washed with cold water and then weighed as nickel dimethylglyoximate after drying at 110-120 �C. With large precipitates, or in work of high accuracy, a temperature of 150 �C should be used: any reagent that may have been carried down by the precipitate is volatilised. Ni2+ + 2H2DMG = Ni(HDMG)2 + 2H + 2.For this experiment,there's a lot of precaution need so that,we can get the best result. First,the nickel dimethylglyoximate is a precipitate that is very bulky in character. Therefore, the sample weight used in the analysis must be carefully controlled to allow more convenient handling of the precipitate during transferral to the filtering crucible. ...read more.

Citric/tartaric acid was added in the interest of creating soluble iron, chromium and trace transition metal complexes that would pass through the crucible. The precipitate was also washed thoroughly under vacuum to prevent the deposition of soluble species in the insoluble precipitate. *?Mass fluctuations in Gooch crucibles, minimised by handling with tongs where appropriate, to preclude fingerprints. The cleanliness of the top pan balances and microwave trays employed cannot, however, be guaranteed. QUESTIONS: 1. Draw a structural formula of bis (dimethylglyoximato)nickel (ll) and describe the type of hybridization involved. The structural formula for the complex is as illustrated. Arrowed bonds indicate a coordination bond. Note the removal of two protons from the original ligands and the potential for hydrogen bonding between the strongly electronegative coordinated oxygen atoms and nearby hydroxyl groups. This complex is square planar as is often observed in d8 complexes, i.e. bonding interactions take place in the dx2 ??y 2 orbitals of the parent Ni(II). bis(dimethylglyoximato)nickel(II) 2. Explain why the temperature of the solution must be mantained at 60-80�C during the precipitation process. CONCLUSIONS : 1.The weight of precipitate from crucible (1) =8.6205 g 2. The weight of precipitate from crucible (2) =8.4384 g 3. ...read more.