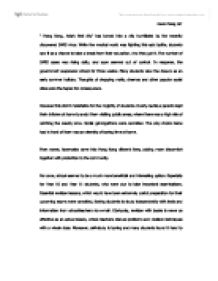 " Hong Kong, Asia's first city" has turned into a city humiliated by the recently discovered SARS virus. While the medical world was fighting this epic battle, students saw it as a chance to take a break from their education. And they got it. The number of SARS cases was rising daily, and soon seemed out of control. In response, the government suspended school for three weeks. Many students view the closure as an early summer holiday. Thoughts of shopping malls, cinemas and other popular social sites were the hoped for consequence. However this didn't materialize for the majority of students. ...read more.

Especially for Year 10 and Year 11 students, who were due to take important examinations. Essential revision lessons, which would have been extremely useful preparation for their upcoming exams were cancelled, forcing students to study independently with texts and information from schoolteachers via e-mail. Obviously, revision with books is never as effective as an actual lesson, where teachers discuss problems and revision techniques with a whole class. Moreover, self-study is boring and many students found it hard to absorb information. This, along with the distractions of the Internet and television meant that many students inevitably failed their exams. Besides from the negative consequences that SARS brought to Hong Kong, it also brought some positive ones. ...read more.

Bleach fumes ever-present, and cleaners could be seen more frequently alongside their buckets of water and mops. The school showed it was aware of the situation and was obviously taking action in school premises. Even though the school has done its part to prevent the outbreak of SARS in school, students also had to be co-operative in order to establish a hygienic environment. Initially, a small portion of the students were still petrified about the SARS menace and continued to use facemasks, following the educational departments advise. "Hong Kong, the city of change" has also developed into a much cleaner city. SARS has taught Hong Kong and its people a meaningful lesson, sadly, at the cost of many innocent lives. Let us hope that we will never see a repeat of that tragedy in the future. Kevin Cheng 10T ...read more.