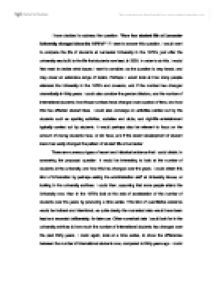 &quot;How has student life at Lancaster University changed since the 1970's?&quot;

I have decided to address the question: "How has student life at Lancaster University changed since the 1970's?" If I were to answer this question, I would want to compare the life of students at Lancaster University in the 1970's, just after the university was built, to the life that students now lead, in 2003. In order to do this, I would first need to decide what issues I want to consider, as the question is very broad, and may cover an extensive range of topics. Perhaps I would look at how many people attended the University in the 1970's and onwards, and if the number has changed dramatically in thirty years. I could also consider the gender divisions, and the number of international students; how these numbers have changed over a period of time, and how this has affected student lives. I could also converge on activities carried out by the students such as sporting activities, societies and clubs, and nightlife entertainment typically carried out by students. It would perhaps also be relevant to focus on the amount of money students have, or did have, and if the recent development of student loans has vastly changed the pattern of student life at Lancaster. ...read more.

I could also obtain details of student loans, and compare this to the financial system that was in place when Lancaster University was first established. It would be interesting to look at quantitative evidence of the student's, past and present, financial situation, to see if this reflects the different ways in which they live. This evidence could be obtained from Local Council files, government files, or again, from Lancaster University files. It can be seen here that a considerable amount of quantitative evidence can be used in answering the question of student life at Lancaster University. The information can be collected from a number of sources and brought together to be compared with similar data from different years. Such data is valid and can be very useful in researching certain topics. However, there are also limitations, which must be considered in using the data. Some numerical data may contain proxies, or gaps showing missing data, which could raise issues of validity. The comparability of the data must be taken into account, and whether or not the categories, or the way the data has been collected, has changed over time. ...read more.

As there are far too many past and present students, I would have to draw on a smaller sample that would represent the students as a whole; for example I would need to ask an equal percentage of male and female past and present students, a representative sample of international students and students with varying types of degree. Although some researchers regard quantitative data very highly, and believe that it is superior to other sources of evidence, others believe that it is on an equal level with, or even less respected than in some cases, qualitative evidence. Despite the fact that it is believed that statistics cannot be disagreed with, it can be seen that they can often be distorted and manipulated, in order to show the desired results. For example, a researcher could ask specific questions on a questionnaire in order to find specific answers, particularly for closed questions, where the possible answers are very limited. Qualitative evidence, although it cannot be quantified or counted in any way, can often be more reliable, as it allows people to give the full story without being guided in any way. Similarly, it is much harder to argue with such evidence, as they are often people's own opinions or perceptions. In answering ...read more.