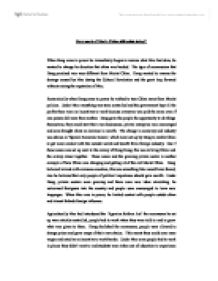 How much of Mao&amp;#146;s China still exists today?

How much of Mao's China still exists today? When Deng came to power he immediately began to reverse what Mao had done, he wanted to change he direction that china was headed. The type of communism that Deng practised was very different from Maoist China. Deng wanted to reverse the damage caused by Mao during the Cultural Revolution and the great leap forward without ruining the reputation of Mao. Economically when Deng came to power he wished to turn China away from Maoist policies. Under Mao everything was state controlled and the government kept all the profits there were no incentives to work because everyone was paid the same even if one person did more than another. Deng gave the people the opportunity to do things themselves; they could start their own businesses, private enterprise was encouraged and soon brought about an increase in wealth. The change in economy and industry was shown in 'Special Economic Zones', which were set up by Deng to enable China to get more contact with the outside world and benefit from foreign industry. ...read more.

In Industry Mao had every thing state controlled or owned he made sure that communists rather than businessmen ran businesses. Under Deng this changed and he applied a managerial responsibility system in 1984. Managers were given much greater responsibility and could even sell abroad to capitalist countries. Capitalist enterprise was being accepted in Chinese industry. They could set up workshops, hire people and profit from the work of their employees. This open engagement in what Marx called exploitation, would never have been allowed in Maoist China. In education, only 80,000 out of one billion people received university education, Mao had decided the future of young intellectuals and made sure they would never become to powerful, they were no longer in a position to judge or denounce his policies. Mao was more concerned with the physical side of teaching people. Under Deng more encouragement was given to progress in education. Once education was complete the people had a choice of jobs, they could now go for technical or skilled jobs with large pay. ...read more.

In conclusion there have been so many changes that virtually none of Maoist china exists today. The economy was revamped and made more modern, there was a greater capacity to become wealthy and afford new things. People were given more responsibility in the workplace and were free to make their own decisions. The younger generations were helped to educate themselves and given a free choice as to what they wanted to do with their lives. Peoples social life was improved, they had more time and they were happier. Because of the change in the economy they had more money to spend. Politically China had changed, communism was still there but the beliefs had lessened a bit to allow people to be able to live in the world comfortably, however the main points are still in focus. The people's army is still running as it was in Mao's day but it is now much less of a force. China Still had a long way to go to become a democracy and as Tiananmen Square shows that some people do want it. These changes maybe a long time coming but at least they escaped Mao's restrictive control. ...read more.