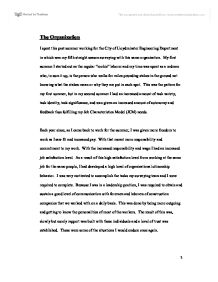 I spent this past summer working for the City of Lloydminster Engineering Department in which was my fifth straight season surveying with this same organization.

The Organization I spent this past summer working for the City of Lloydminster Engineering Department in which was my fifth straight season surveying with this same organization. My first summer I started out as the regular "rookie" laborer and my time was spent as a rodman who, to sum it up, is the person who walks for miles pounding stakes in the ground not knowing what the stakes mean or why they are put in each spot. This was the pattern for my first summer, but in my second summer I had an increased amount of task variety, task identity, task significance, and was given an increased amount of autonomy and feedback thus fulfilling my Job Characteristics Model (JCM) needs. Each year since, as I came back to work for the summer, I was given more freedom to work as I saw fit and increased pay. With that meant more responsibility and commitment to my work. With the increased responsibility and wage I had an increased job satisfaction level. As a result of this high satisfaction level from working at the same job for the same people, I had developed a high level of organizational citizenship behavior. I was very motivated to accomplish the tasks my surveying team and I were required to complete. Because I was in a leadership position, I was required to obtain and sustain a good level of communication with foremen and laborers of construction companies that we worked with on a daily basis. This was done by being more outgoing and getting to know the personalities of most of the workers. The result of this was, slowly but surely rapport was built with these individuals and a level of trust was established. These were some of the situations I would endure once again. The Story This particular summer was no different. I came back and was given the responsibility of being accountable for 4 other summer students. ...read more.

If he was a self-monitoring individual he would realize that the needs discussed in McLelland's Learned Needs Theory are not present for him. Need for Achievement Adam has a false need for achievement, which is evident through his lack of motivation to complete the tasks that are asked of him. When it is time for his group to go back to the office and discuss with Ron the completion of their task, he does not hesitate to take credit for getting the job done. A perfect example of this was when he, Mandy, and Robin completed a topographic survey of Bud Miller Park (Lloydminster) he came back to the office and talked of how "he was doing all of the work and the girls were useless and slowing down the job". It just so happened that he had been spending most of the time at that particular job site, which was conveniently located in a remote brush covered area, sleeping the morning away in the truck and tanning in the afternoon in his shorts and sandals. Adam's false need for achievement is also characterized by his gratification of completing mindless and menial tasks such as driving to the supply store to pick up wood and hammers. If my group was in need of supplies I would personally send Adam to get them for us because I knew how much driving around in the truck and wasting time was gratifying to him. I also had him do it instead of Kiel or myself because we had important work to complete in order to meet construction standards and deadlines, which were always being changed at the drop of a hat. Need for Social and Personal Power Adam's false need for social power is very evident in this situation because he does not care about the other people's feelings or reputation in which he works with. He only wants to have the power to make them look bad for the benefit of himself and his reputation. ...read more.

* Ron needs to ensure that effort leads to performance with the individuals he hires by applying the expectancy theory application when hiring and dealing with new summer student workers. The problem with Adam would have never occurred if Ron had ensured that Adam had the proper attitude to be competent at work dealing with other people and working in a team atmosphere. If Adam and Ron followed through with these suggestions the problems would have gradually been erased over the past summer. Because it would have taken a long time for these implementations to occur, the "quick fix" was to simply release Adam from his position, as he was the main cause of lower efficiency and satisfaction levels What I Learned and My Opinion After a very busy, eventful, frustrating, and exciting summer I came out with a greater appreciation of who I am as a person. Without considering myself as better than anyone else it was confidence building and motivating to know that I was capable of handling a situation like this where I was in leadership position and had to make a big decision that would affect me a great deal. Comments I got from Ron in the latter days of the summer were ones of praise and really improved on my job satisfaction and overall organizational citizenship behavior and organization commitment. I also learned that when it comes down to it an individual has to do the right thing and stick to their beliefs and values to make decisions. A person must also think through all the facts when faced with a big decision and weigh all of the benefits against the consequences. Reflecting back on this situation has also made me more knowledgeable as to what people think and how they act in certain situations. It once again reminded me that not everyone thinks the same way I do because everyone is different. This reflection most all has made thankful to my parents and friends for instilling me with beliefs and values, which give the ability to analyze, comprehend, and act the way I do. 13 2 ...read more.