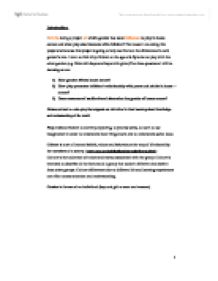 Introduction: I will be doing a project on which gender has more influence to play in home corner and what play also interacts with children? The reason I am doing this projects is because this project is going to help me find out the differences in each gender's role. I want to find why children at the age of 4-5yrs do not play with the other gender (e.g. Girls with boys and boys with girls.) The three questions I will be focusing on are 1) How gender effects home corner? 2) How play promotes children's relationship with peers and adults in home -corner? 3) Does resources of multicultural determine the gender of home corner? Home corner is a role-play that supports an individual in their learning about knowledge and understanding of the world. Play enables children to learn by exploring, to practise skills, to learn to use imagination in order to understand how things work and to understand social roles. Culture is a set of learned beliefs, values and behaviours the way of life shared by the members of a society. (www.saa.org/publications/sampler/terms.html) Culture is the collection of values and norms associated with the group. Culture is intended to describe all the features of a group that make it different and distinct from other groups. Culture differences due to different life and learning experiences can effect communication and understanding. Gender is the sex of an individual (boy and girl or man and woman). Literature Review: History of play In 1873, Spencer "declared that play activity, driven by surplus energy is directed towards activities which have a prominent role in the animal's/person's life. He emphasised a close relationship between art and play saying that ". Art is but one kind of play." There are many types of plays the children learn from: Sensory-motor play. Sensory/ Messy play touching, smelling, tasting and looking helps the child explores and experience the world through their senses, they then begins to explore objects, materials and toys outside themselves. ...read more.

Most children as boys, think that girls can't be policeman and boys can't look after babies. At the age of five, children tend to form a group of the same gender and won't let the other gender play with them. Looking at their parents or their relative, boys think and also set in their minds that girls are suppose to be looking after babies and families, and boys are suppose to be working hard like, building a house, or doctors, or fire-fighters etc... some children imitate other people's language. They keep their concentration away from girls and also try to stay away from girls. Children are more knowledgeable about the wide variety of gender stereotypes and gender roles. At the same time they have open minds about what the males and females can do and this continues in the adolescence and this kind of thinking gets stronger. Gender stereotyping affects behaviour only when children incorporate those beliefs into their own gender identities, self-perceptions of what they can do at play in school and further perceptions in society. Gender Roles: John Locke believed that children are born as blank slate. He believes that children are tabula rasa. John Locke also believes children are born with nothing at all, and all kinds of experiences and responsibilities can shape them up in any way they wish, e.g. rewarding them for good behaviour not with sweets or money but appraisals and approvals. Jean Jacques Rousseau disagrees with John Locke and believes that children are not blank slate and children are filled with all the knowledge with the adult instruction. Children only need to know what is right and what is wrong and are mature enough to learn themselves. Piaget does not believe that children's learning depends on the reinforcement, such as reward from the adults. According to his cognitive development theory, children actively construct knowledge as they manipulate the world. ...read more.

When young children are watching television they are aware that TV images can represent reality. Since the 1950's researchers and public citizens have concerns about attitudes and behaviour that children have by watching T.V. Most studies believe that TV is great impact on children by violence, other researchers focus on TV that teaches children to be undesirable gender and ethnic stereotype. Children who are aggressive learn from the media through TV because most of the cartoons have violence and they teach children that being violence and aggressive solves the problem and all the children like to have a go on whatever they see that they think is interesting by watching in the television. Violence has an impact not only on parents but also in peer relationships. Ethnic and stereotype is another impact on children by T.V. Even though females are involved in more careers but on T.V the media has still shown that women are loving, caring and looks after the family. This affects children because boys like to be hyper and loud whereas girls should not be loud but quiet. The T.V has an impact on both genders because children have seen the advertisements and people are with the same sex (boys talking to boys and girls talking to girls), so in the children's view they might think that is how it should be like and they stereotype other children from what they see from the media. How gender affects Home-corner? How play promotes children's relationship with peers and adults in home -corner? Does resources of multicultural determine the gender of home corner? Reference List: Bartlett, S and Burton, D. Introduction to Education Studies. (2007) (2nd eds), SAGE publication LTD. Childcare and education, Third Edition, Tina Bruce and Carolyn Meggit, (hodder and Stoughton), 2004. Cole, M., Cole, S.R. & Lightfoot, C. (2005) 'The Development of Children' edn. 5, New York: Worth Publishers 1 ...read more.