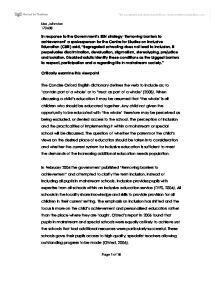 In response to the Governments SEN strategy Removing barriers to achievement a spokesperson for the Centre for Studies on Inclusive Education (CSIE) said, Segregated schooling does not lead to inclusion. It perpetuates discri

In response to the Government's SEN strategy 'Removing barriers to achievement' a spokesperson for the Centre for Studies on Inclusive Education (CSIE) said, "Segregated schooling does not lead to inclusion. It perpetuates discrimination, devaluation, stigmatism, stereotyping, prejudice and isolation. Disabled adults identify these conditions as the biggest barriers to respect, participation and a regarding life in mainstream society." Critically examine this viewpoint The Concise Oxford English dictionary defines the verb to include as; to 'contain part of a whole' or to 'treat as part of a whole' (2008). When discussing a child's education it may be assumed that 'the whole' is all children who should be educated together. Any child not given the opportunity to be educated with 'the whole' therefore may be perceived as being excluded, or denied access to the school. The perception of inclusion and the practicalities of implementing it within a mainstream or special school will be discussed. The question of whether the parents or the child's views on the desired place of education should be taken into consideration and whether the current system for inclusive education is sufficient to meet the demands of the increasing additional education needs population. In February 2004 the government published 'Removing barriers to achievement' and attempted to clarify the term inclusion. Instead of including all pupils in mainstream schools, inclusion provides pupils with expertise from all schools within an inclusive education service (DfES, 2004). All schools in the locality share knowledge and skills to provide provision for all children in their current setting. The emphasis on inclusion has shifted and the focus is more on the child's achievement and personalised education rather than the place where they are taught. Ofsted's report in 2006 found that pupils in mainstream and special schools were equally as likely to achieve yet the schools that had additional resources were particularly successful. These schools gave their pupils access to high quality, specialist teachers allowing outstanding progress to be made (Ofsted, 2006). ...read more.

Tom Shakespeare is an academic with achondroplasia, a genetic disorder which is a common cause of dwarfism. He researches issues surrounding disabilities including the social implications of being different. The DVD, 'The Unusual Suspects' is a small insight into his life and this area of his work. Ivy, Tom's daughter, also has achondroplasia but has been brought up with the feeling that disability is a difference that doesn't really matter, like gender, race or sexuality. This has been possible partly because her father, grandfather and many people she knows are either short or disabled in other ways. Within the society they live they are completely included and do not feel discriminated against. Shakespeare believes that 'people are disabled by society, not by their bodies' (DD122, 2006, DVD). This is demonstrated well by Karin who was born with a visual impairment (DD122, 2006, DVD). When she was eleven years old she was taken to an institutionalised, residential school for the blind and felt very scared at being left. She did not feel any comfort that the other children were also visually impaired and believed that she was in a 'false environment' being told when and how to do everything. The children followed a strict timetable outside of the academic subjects that were taught yet she left the school feeling helpless despite achieving many qualifications. She did not have any life skills to cope alone in the world. In her school the children with more sight were valued highly and given more support and privileges. This discrimination consequently left Karin, her sight very poor, with less opportunities or assistance than the others received. Medical and genetic problems were a focal point for the children and genetic counselling was given to the children as they got older. This segregated school devalued the children they should have been supporting and taught them how to be the disabled person that many people stereotype. ...read more.

Removing Barriers to Achievement describes the right of every child to be educated appropriate to his or her needs (DfES, 2004) yet if the educational setting does not provide adequate equipment or care for these children then the education will not be appropriate to the child's needs. There are many children who require additional equipment and therapy to achieve educational and emotional well being yet currently there is not adequate provision within a mainstream setting to facilitate this. Children from a deaf society require a school in which they can be educated and also maintain their ability to communicate with others in their community. A forced inclusion into a mainstream school removes the child's right to their disabled identity. Even when Eddie was raised the same as his brothers he felt that he had been denied access to the disabled part of his personality and heritage as a person in a wheelchair. The result of his mainstream childhood has caused him to seek the missing part of him through campaigning for disability rights. It may be true that segregation does not lead to inclusion however inclusion is not a simple cure for society's attitudes towards disabilities. Adults who have experienced an inclusive education do not feel more included in society because of it. Some feel incomplete because the disabled part of their character has been ignored yet in comparison other adults who have attended a segregated school now enjoy a fulfilled life. Inclusion is not a simple process that can be achieved successfully by all schools. Schools need to be inclusive for the children who attend their school. A child who spends an excessive amount of time with school staff is not being included and may benefit from the experience a different school may offer. The Government's SEN strategy is aiming for a similar result to the Centre for Studies on Inclusive Education but is focussing on the inclusion of the child in suitable environment to achieve their potential. This will not always mean a mainstream school but maybe through a combination of resources that collaborative provision can bring. ...read more.