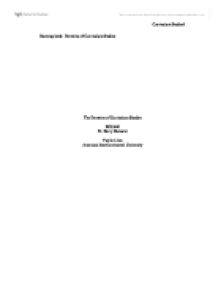 In the course of this research on curriculum history, this student found that many believed a nationalized curriculum should be developed for US schools. Implementing the same curriculum in all school systems

Running head: Domains of Curriculum Studies The Domains of Curriculum Studies EDU660 Dr. Barry Meinster Twilla Liles American InterContinental University Introduction Curriculum may be defined as what is taught and learned in an educational setting (Forrest, 2000). According to Johnson (1967) (as cited in Forrest, 2000), curriculum is "a structured series of intended learning outcomes" and Kearney and Cook (1969) (as cited in Forrest, 2000) define it as "the experiences a learner has under the guidance of the school." The first definition depicts a restricted, narrow view of curriculum where as the second definition presents a larger, more open view. According to Hlebowitsh (1997), "curriculum literature clearly reflects new concerns but the actual conduct of the United States' school curriculum has remained relatively unaffected." Why is the study of curriculum history important to educators? "Perhaps now, more than at any other times in history are the efforts of those concerned with curriculum matters challenged" (Riley, 2004). With this said then perhaps it should be mandatory for all professional educators, including curriculum specialists, to a historical perspective in which to integrate the past with the present. ...read more.

War, in this country, caused extensive damage to the quality of education including the destruction of facilities, teaching materials, and teachers (Bender, 2000). In BiH, there was a great deal of manipulation in education for political and ideological purposes. For example, students were given different interpretations of the same facts (how the textbooks/curriculum portrayed the war) (Pasalic-Kreso, 1999). Ethnicity, language, and religion were often used to separate students. At the beginning of each school term there was mass chaos concerning whether or not schools, classrooms, and curriculum would be divided or undivided according to ethnicity, language, and/or religion (Pasalic-Kreso, 1999). Before the war, the education curriculum of BiH included history, nature and society, language and literature, art and music. These subjects continue to be taught today. Today there are 3 different curriculums implemented in BiH: Yugoslavian-uses a Yugoslav curriculum and textbooks with subjects taught only in Serbian; Croatian-uses a Croat curriculum, textbooks, and subjects are taught only in Croatian; and Bosnian. Schools that are Bosnian controlled teach in the Bosnian language and use textbooks of the Republic of Bosnia and Herzegovina (Bender, 2000). Students who are not part of the "dominant group" or are the minority of their school must accept the curriculum being used ...read more.

These students enter school with a disadvantage because they cannot speak, read, or write in English. Everything they do, from the time they enroll in a Georgia school, is done in a language they know nothing about. They are placed in English to Speakers of Other Languages (ESOL) classes for 45 to 50 minutes a day to learn English skills (Wikipedia, 2006). Our curriculum definitely does not match our societal change. If it did our schools would have some portion of the subjects taught bilingually which could possibly benefit native English speakers as well as the non-English speakers. Conclusion Both Bosnia's and the United States' educational systems are still basically outdated. Bosnia is controlled by decontextualized information with little attention paid to skills, values, or attitudes as desirable learning outcomes with lecture style teaching (Stabback, n.d.). The United States has seen some recent changes in its curriculums, especially since the introduction of the America's Choice program. Lessons that were once teacher directed now are student directed placing the student in control of his or her own learning. In the course of this research on curriculum history, this student found that many believed a nationalized curriculum should be developed for US schools. Implementing the same curriculum in all school systems nationwide does not seem feasible. It seems unfair or discriminating. ...read more.