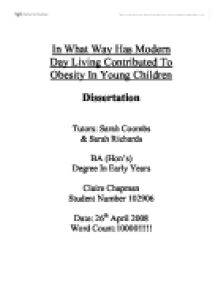 In What Way Has Modern Day Living Contributed To Obesity In Young Children? As a Early Years Professional the researcher feels that childhood obesity is therefore a major issue and feels that the information will be used to provide an insight into possibl

In What Way Has Modern Day Living Contributed To Obesity In Young Children Dissertation Tutors: Sarah Coombs & Sarah Richards BA (Hon's) Degree In Early Years Claire Chapman Student Number 102906 Date: 26th April 2008 Word Count:10000!!!!! CONTENTS INTRODUCTION 1 CHAPTER 1 Risk The dangers of modern day life and children's physical activity. travelling to school by car, loss of playing field and park space. New build housing with minimum garden space. Stranger danger CHAPTER 2 Family Life Working parents, single parents, living in high rise flats no outdoor garden, eating together as a family, cooking skills for single parent, parental responsibility to eat healthy, Nature nurture. Considering how eating habits are established in the home and through the family. CHAPTER 3 Food Disadvantaged families in rural areas not being able to access local Supermarket's changing eating patterns, changes in food marketing/advertising and more availability of convenience foods that are high in fat and sugar. CHAPTER 4 Conclusion CHAPTER 5 Critical Self Review LIST OF REFERENCES APPENDICES Appendix 1 Appendix 2 ABSTRACT Obesity continues to increase ................ This library based research paper used secondary sources of information aimed at exploring the risk factors fro childhood obesity. Once the risk factors had been identified intervention strategies were evaluated for their effectiveness. The researcher then combined the information to make recommendations for future statargies for combating the growth. The finding of the study indicate................ INTRODUCTION The aim of this research is to understand 'In what way has Modern Day Living Contributed to Obesity in young children?' ...read more.

According to British Nutrition Foundation (2005) many people have a low level of activity because of using a car rather then walking for short journeys. British Nutrition Foundation goes on to say by walking or cycling instead of using a car, going to the gym and taking part in team sports can help a person maintain a healthy body weight by increasing energy expenditure. British Nutrition Foundation (2005) believes lack of activity is an important factor in the increasing prevalence of obesity. Many people in countries such as the UK have very interactive lifestyles; few people have physically active jobs or do significant amounts of exercise in their free time. Any form of activity or exercise that is enjoyed should be encouraged. Being physically active is important not just in the prevention of overweight and obesity, but also to prevent diseases such as diabetes. Aucott et al (2004) indicate the risk of developing diabetes being reduced by weight loss was shown in seven studies. Obesity is a condition in which abnormal or excessive fat accumulates in adipose tissue, thus impairing ones health. Wilson et al (2003) argues that estimates or real figures related to obesity may often differ. An epidemic of childhood obesity has occurred in recent years, it is felt that evidence on risk factors childhood obesity is limited at present, recognised risk factors such as schooling lack of outdoor space. O Brien (2001) indicated in the press a mobile class room have been built on the grounds and there is no where big enough for the children to play safe. ...read more.