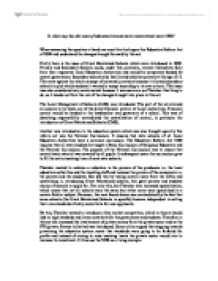 In what ways has the issue of education become more controversial since 1988?

In what ways has the issue of education become more controversial since 1988? When answering the question at hand one most first look upon the Education Reform Act of 1988 and understand the changes brought forward by this act. Firstly there is the issue of Grant Maintained Schools which were introduced in 1988. Primary and Secondary Schools could, under this provision, remove themselves fully from their respective Local Education Authorities and would be completely funded by central government. Secondary schools also had limited selection powers at the age of 11. This went against the whole concept of universal provision because it allowed secondary schools to pick which students it wanted to accept according to its own criteria. ...read more.

However, this new found choice was contradicted by the fact that some schools (the Grant Maintained Schools in specific) became independent in setting their own standards of entry and criteria for new applicants. By this, Thatcher wanted to introduce a free market competition, which in theory should lead to high standards and lower costs both for the government and students. Therefore in this act she increased the involvement of private money from the private sector and so the PFI (private finance initiative) was introduced. Some critics argued that stepping towards privatising the education system meant that standards were going to be forfeited for profits and instead of aiming to raise teaching levels the private sector would aim to increase its investment. Critics use the NHS as a living example. ?? ?? ?? ?? ...read more.