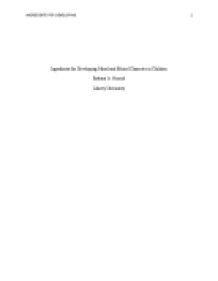 Ingredients for Developing Ethical and Moral Character in Children

﻿INGREDIENTS FOR DEVELOPING Ingredients for Developing Moral and Ethical Character in Children Barbara A. Norrod Liberty University ________________ Abstract During the twentieth century, multiple research studies were performed evaluating child rearing. Many theories were proposed that did not include the elements of educating children with the end result of sound moral and ethical character development. However, moral education is the primary focus of educations in this era. Producing moral and ethical character in children requires foundational training during childhood which demands authoritative parenting incorporating appropriate boundaries, parental presence, coaching, modeling, constant nurturing, and accountability with understanding. More importantly, the primary concern is parental (primary caretaker) involvement. This is mandatory for moral and ethical character development because research proves that children learn what they see modeled. Evaluated literature reflects societal trend for embracing moral leadership including other-focused ideals to serve humanity that some consider "old-fashioned". Furthermore, research demonstrates that the direction of society's future is contingent upon the character of its maturing generation. ________________ Ingredients for Developing Moral and Ethical Character in Children Baking a cake requires one to have all the right ingredients for the cake to become the tasty creation one intends. Each ingredient performs a significant task in the development of the cake, yet many of the ingredients are not very tasty individually. For example, the flour gives it substance, and the gluten within the flour gives the cake volume, structure, and stability, but flour by itself is pasty and tasteless. Eggs in cake batter are necessary to hold the ingredients together and assist the cake in maintaining its shape. Giving the cake that sweetness, is the sugar. In addition, sugar causes the confection to brown nicely during baking to produce that golden color. Vanilla extract gives the pastry just the right hint of flavor. Certainly liquids are also necessary. Liquids provide consistency, balance, flavor, moisture, and assist with leavening. In addition, baking soda and baking powder are leavening agents. ...read more.

This is the predominant way to influence good values and character in children. Although character education is taught in schools, much depends on the support children receive from the adults around them; therefore, parents are essential for character education (Kantrowitz, Springen, & Scelfo, 2005). Relationships All relationships require commitment. Intimate relationships take work and time. According to Clinton and Sibcy (2006), "Your relationship with your kids is at the heart of parenting" (p. 80). Keeping a solid close relationship between parent and child allows the parent to have influence in the life of that child (Clinton & Sibcy, 2006). Cloud and Townsend believe the two most important character traits a child requires to mature are attachment and honesty. If the child can connect emotionally and believes he is cared for by his parents and does the child tell the truth. When children hit the adolescent years, this influence is particularly valuable (Kantrowitz, Springen, & Scelfo, 2005). Research proves that peers and culture influence teens for music, clothes, and fun, but parents have a stronger influence on the life altering issues such as sex, drugs, faith (Clinton & Sibcy, 2006). Additionally, relationships with parents, teachers, and other adults introduce the child to important social norms (Damon, 1988). Out of these relationships, the child learns respect for the social order, its organizational principles, and authority in general (Damon, 1988). Parental Presence Although classified under different names depending on the professional and the era, many child psychologists advocate for "floor time" to achieve this level of intimacy in the relationship between parent and child (Hulbert, 2003). In the 1980s, Brazelton and Greenspan, child rearing authorities of their time, initiated "floor time", a daily thirty minute period of one-on-one play time between parent and child (Hulbert, 2003). This time was considered crucial to promoting healthy emotional and cognitive development (Hulbert, 2003). Moreover, it was touted as foundational for any lasting sense of discipline and morality (Hulbert, 2003). ...read more.

Peers can influence positively or negatively and it is necessary that the convictions of young people be resolute in their hearts and minds to avoid being swayed by their peers. Finally, it is critical that young people remember that they are in control of their own destiny (Hemfelt & Warren, 1990). Hemfelt and Warren (p. 255) further go on to describe six personal attitudes that parents can maintain to help their child grow up successfully. 1. "I'll do whatever I perceive is in your best interest, both now and in the future, to help you walk out the front door successfully." 2. "I will commit to setting clear boundaries and expectations." 3. "I will make every effort to understand your situation and your feelings as you leave this house." 4. "I will allow you to fail while it is still safe (while you still have your home to come home to). I renew the spoken pledge: 'I will walk through this with you.'" 5. "I'm going to encourage you to have relationships outside the family, both with other adults and with peers." 6. "I will be committed to helping you understand that the secret of life is coping, not mastering." Raising children is a rewarding yet arduous task. Raising children with sound moral and ethical character is even more challenging. However, the reward is a well-adjusted other-focused young person who cares about his community and society as a whole. Although there have been a number of transitions in parenting over the years, raising a child of good character with sound moral and ethical virtues is again en vogue. In a special 2000 issue of Newsweek a poll was cited that showed raising a moral person had edged out rearing a happy child or a smart child and was now at the top of the list of parenting goals (Hulbert, 2003). With all of the necessary elements, it is possible to raise children with good character that will be of service to society. Success as individuals and as a society shall be determined upon the backs of its citizens' character. ...read more.