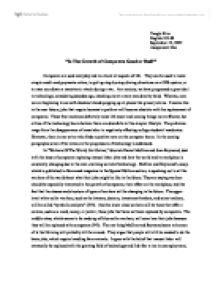 Is the growth of computers good or bad?

Yanghi Kim English 101.88 September 12, 2002 Assignment One "Is The Growth of Computers Good or Bad?" Computers are used everyday and in almost all aspects of life. They can be used to make simple credit card payments online, to pull up step-by-step driving directions on a GPS system, or to even coordinate a massive air attack during a war. As a society, we have progressed a great deal in technology, considering decades ago, checking out at a store was done by hand. Whereas, now we are beginning to see self-checkout stands popping up at places like grocery stores. It seems like in the near future, jobs that require humans to perform will become obsolete with the replacement of computers. These fine machines definitely make life easier and running things more efficient, but critics of the technology boom believe there are downfalls to this simpler lifestyle. The problems range from the disappearance of mass labor to negatively affecting college students' academics. However, there is one writer who finds a positive note on the computer boom. In the coming paragraphs some of the views on the progression of technology is addressed. In "Workers Of The World, Get Online," futurists Daniel McGinn and Joan Raymond, deal with the issue of computers replacing manual labor jobs and how the world and its workplace is constantly changing due to the ever-evolving world of technology. ...read more.

All of these activities are being done during the crucial times when they should be studying. Stulman believes that Universities should not be placing such an emphasis on the use of computers and the Internet (562) and the populations of students doing poorly in their classes is an indirect result of such an emphasis. I agree that the increased use of computers among students is a great distraction because I am too a victim of this computer craze. During countless nights, I have ended up sitting at my computer until the next morning, finishing up an assignment. This usually happens to me because I spend the time I should be doing schoolwork, on surfing the web and downloading songs. I too have a collection of MP3s that would take days to listen to. The problem Universities and colleges are having with computers and students is continued in this next essay. Ian Zack, speaks to the Universities and students about how computers help students cheat, in his essay, "Universities Find Sharp Rise In Computer-Aided Cheating," This essay comes at a time when cases of cheating have sharply increased due to the ease and quickness of being able to do it on the computer. The simplicity of searching for papers online and the ability to buy already written papers from online term paper stores makes cheating the most appealing thing to a student who has run out of time or is just plain lazy. ...read more.

She is speaking to those Internet users who like to chat online but the reader would have a hard time believing and understanding her findings if they, themselves have never tried gender switching. Although I have never done so myself, gender switching online seems like a good way for people to learn more about themselves and the opposite sex as long as it is harmless "lying." I have heard of people falling in love over the Internet and it would be unfortunate if one falls for someone who does not exist. Hopefully, people will not let it get that far and these experiences will help people treat and understand others better. There are many different views and opinions on how the growth of technological knowledge and use will affect our lives, culture, and futures. Computers can help our society in various ways. They can help certain people understand themselves and others better through role-playing. Even the replacement of workers by machines might also benefit our society, such as more leisure time and the ability to do charity work. Students who are engrossed with their computers and use them for the wrong reasons will learn from their mistakes and learn to delay instant gratification and hopefully become more responsible. I believe these are good life lessons for college students to learn. Even though there seems to be negative outcomes that may occur due to this era of computers, I do believe that at the same time, there will be a positive effect on our lives, culture, and futures. ...read more.