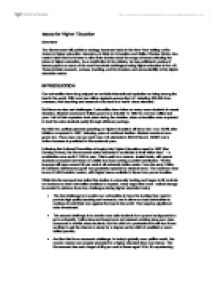 Issues for Higher Education Overview The Government will publish a strategy document early in the New Year setting out its vision for higher education. Secretary of State for Education and Skills, Charles Clarke, has made it clear that he is keen to stimulate debate about the range of issues affecting the future of higher education. As a contribution to the debate, he has published a series of issues papers on some of the most important challenges facing higher education in the UK. These include research, access, teaching, and the freedom and accountability of the higher education sector. INTRODUCTION Our universities have long enjoyed an enviable international reputation as being among the best in the world. With over two million students across the UK including 220,000 from overseas, their teaching and research at its best is of world-class standard. But there are also real challenges. Universities have taken on many more students in recent decades. Student numbers in Britain grew from 340,000 in 1962 to over two million last year. Half of that expansion took place during the nineties, when universities were expected to fund the extra students partly through efficiency savings. By 2003-04, publicly planned spending on Higher Education will have risen by 15.6% after inflation compared to 1997, following years of continual decline. Student numbers have grown too. There were ten per cent more UK students in 2001/2 than in 1996/7 and a further increase is predicted in this academic year. Following the National Committee of Inquiry into Higher Education report in 1997 (the Dearing review), the Government asked students to contribute to their tuition fees - a contribution now worth �1100 a year. This is paid on a means-tested basis, with poorer students exempted and those on middle incomes making a partial contribution. Yet the taxpayer still pays around 90 per cent of all university tuition costs. From the early 1990s, the student maintenance grant was gradually replaced by student loans. ...read more.

We treat 18 year olds as adults in most aspects of their lives. But for HE they are treated as dependents and we assume their parents will fund them. Is this the best approach? If we don't take family circumstances into account, doesn't the state either end up subsidising the people that need it least, or failing to provide support for those that need it most? Does the focus of our current student finance system on a student's parental income rather than their own later earnings discourage students from thinking about a degree as a long-term investment? Independent choices to invest in the future Buying a new house or new car costs money. Young people think nothing about borrowing the funds or beginning a mortgage. According to the Right of Admission Reserved Study in 2002 half of young people accepted that they would be in debt for most of their life. One in four graduating students funds their social life on a credit card. Students spend 51% of their income on essentials and 49% on what could reasonably be called non-essentials. And the Student Income and Expenditure Survey found that while students spent �2750 on essentials (rent, food, books, travel) in 1998-9 compared with �2905 three years earlier6, spending on non-essentials (mainly entertainment) grew from �2125 to �2653 in the same period. It also found that most students boosted their income with a part-time job. Nearly two thirds of full-time students worked during the academic year while 82% worked over the summer holidays. Student loan repayments have been linked to earnings since 1998 and attract no interest. This represents a substantial subsidy by the government, equal to about 40% of the value of the loan in terms of interest foregone. Yet student loans are still presented as a debt on a par with more expensive liabilities like commercial loans and credit card debt. This may lead to some reluctance among young people to see a university education as an investment in the future. ...read more.

However, PriceWaterhouseCoopers found that small and medium sized employers were often too specific about the skills and experience they expected from graduates, without recognising their long-term potential. New two year foundation degrees are developing as an important route to higher technician qualifications. They are specifically intended to provide the higher-level skills which employers have said are in short supply. But although employers say that they want more skills of this kind, the labour market premium is still much higher for traditional three-year honours degrees - and students are still choosing these over sub-degree programmes. Is there a clear picture of what employers want and need from graduates? How can we best use foundation degrees and other sub-degree programmes like HNDs and HNCs to address higher level skills shortages? Do universities do enough to prepare students for the world of work? Regional policy and regional engagement In the regions, having a university is seen as an important part of an area's economic regeneration. The lobby for the Combined Universities in Cornwall was a clear example of this. But the relationship can work in two ways: universities can simply serve their regions, both economically and socially, or they can be the driving force for change. 1 Posts funded by HE institutions, HEFCE and fees. 2 Those awarding degrees at at least bachelor's level 3 How important is business R&D for economic growth and should the government subsidise it? Griffith, R. (2000) Institute for Fiscal Studies 4 Youth Cohort Study 5 In real terms - interest is charged at the rate of inflation 6 At 1998/9 prices 7 Note that these are figures from the pay scales, and different Universities use them very differently - for example, in some Universities no lecturer starts at the bottom of the scale. 8 Greenaway and Haynes (Nottingham 2000) 9 Taylor Nelson Sofres 10 The balance is made up of social security benefits, other grants and other income. 11 How important is business R&D for economic growth and should the government subsidise it? Griffith, R. (2000) Institute for Fiscal Studies ...read more.