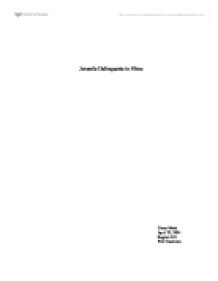 Juvenile Delinquents in Films Grace Mack April 22, 2004 English 101 Prof. Cushman In depicting juvenile delinquency in the classroom, a few film directors portrayed novice teachers' desire to reach what the school system customarily labeled as "problem students." These films illustrate that these students are often categorized quickly and unfairly, and hopeful intervention by a few caring and zealous teachers is enough to change their lives and attitudes for the better. In the black and white 1955 film "Blackboard Jungle," Mr. Dadier (played by Glenn Ford) was an idealistic teacher on his first job in a tough, urban, mostly white male high school. The characters were dressed in clothing of the time (jeans rolled up at the cuffs, tee shirts, bow ties, baseball caps) and the boys wore their hair in the Elvis Presley pompadour style. The students were led by a gang leader, Artie West, whom they looked up to and feared. Mr. Dadier was faced with a bunch of rough juvenile delinquents, fellow staff members who were unresponsive and indifferent, and a principal who refused to admit the school had discipline problems. Sidney Portier, for example, played a student who found no one really cared--students and teachers alike--so he just took up space until he could drop out of school. ...read more.

In one particular scene, a demonstration of this is made when Mr. Thackeray, already exhausted after just a few weeks, walks into his classroom and instantly smelled a foul stench emanating from the smoking stove. "All you boys, OUT! The girls stay where they are!" he barked. He waited until the boys exited, and then turned on the girls: "There are certain things a decent woman keeps private; only a filthy slut would have done this! And those who stood by and encouraged her are just as bad, I don't care who they are!" Most likely it was a boy who did the filthy act, but the accusation was extremely effective against the girls because it instantly drove a wedge between the genders. The girls did not appreciate being humiliated by the boys in the first place, but to then further humiliate them by minimizing the boys' guilt was beyond what the girls were prepared to tolerate! By the time Mr. Thackeray re-enters after demanding they clear the air, he has found a new tactic in how to treat his students: he junked all their textbooks. Gaining their attention by this most unusual act from a teacher, Mr. Thackeray proceeds to tell his students that he was not going to teach them anything they would find in textbooks. ...read more.

The teacher's response was, "That'll do it." In this film, the viewer knew LouAnne loved her students and helped them to believe in themselves, in their spirit and in their potential. A compelling and fitting release of Coolie's "Gangsta's Paradise" played loudly at the end. Recalcitrant future school drop-outs are transformed by the dedicated and highly adaptive LouAnne. Although characterized as idealistic moviemaking, many can identify with the issues these films portray from personal experience. Viewers who grew up in an inner-city environment and attended schools during the 60's and 70's, were accustomed to the racial rioting, drinking and drugging, peer pressure against conformity, and traumatic home lives these movies underscore. Although I had opportunities other than being a part of this self-indulgent culture, I just did not know it at the time and no one ever went the extra mile to let me know. It was always easier to label students who fail to comport as "problem students" or "juvenile delinquents." It wasn't until I got older that I discovered the choices that LouAnne in "Dangerous Minds" kept talking about. In retrospect, these films all have quite a lot in common. They filled me with renewed hopes and dreams and made me revisit my school years. Juvenile delinquency? Generation gap? I wonder if those terms are falsely constructed. ...read more.