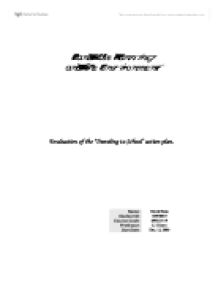 Land Use Planning and the Environment - Evaluation of the 'Traveling to School' action plan.

Land Use Planning and the Environment Evaluation of the 'Traveling to School' action plan. Name: David Bates Student ID: 03970019 Course Code: 69EG3119 Professor: C. Gibson Due Date: Dec. 15, 2003 A typical Monday morning just before nine am, as millions of people pile into their cars to get themselves to work thousands more are getting the kids into the car and off to school adding to the daily congestion levels not to mention clogging up streets surrounding the local schools - and it happens all over again later in the afternoon. As an increasing number of cars are entering UK roadways, congestion becomes more and more of a problem. Recent policies introduced by government, namely the Department for Transport (DT), have addressed this pervasive issue and have targeted the 'school run' as a means of filtering traffic congestion. Both benefits and criticisms have been identified within the action plan and organizations such as the RAC Foundation for Motoring (RAC) have publicly questioned the DT's focus on the school run as a means to relieving traffic congestion. This report will examine the policy on addressing the school run introduced by the DT and evaluate the RAC's criticisms in the attempt to produce some solutions to the school run congestion issue. The 'Traveling to School: an action plan' document (known herein as TSAP) ...read more.

allows students to choose the school they attend - the chosen facility may not be a local school in which case the car may be the only realistic means of transport (RAC Foundation for Motoring, 2003, On-Line). The foundation also questions the imposing of solutions from the government claiming that it would be best left to the schools and students. The RAC further disputes the idea of staggered school start times questioning whether it would reduce congestion in practice and indicating that it could pose as an even larger contributor to congestion as parents may be making separate trips (RAC Foundation for Motoring, 2003, On-Line). In pointing out the legitimate concerns of the parents regarding the safety of their children and inadequate public transport suggests such solutions to the school run congestion problem as school travel plans, 'walking buses' (large group of students walking with adult supervision), school mini buses, 'drop off zones', and cycle clubs promoting groups of student cyclists traveling on safe routes (RAC Foundation for Motoring, 2003, On-Line). The school run congestion problem is not specific to the UK as many other countries are experiencing the same frustration - what sets the UK apart from the others is the issue of space. With ever increasing human as well as automobile traffic populations the problem will become worse as road infrastructure will need to expand into space that isn't or won't be available. ...read more.

Although the congestion caused by motorists involved in the school run is a looming issue, in all reality, change may not be easy. There also remains the question of what effect if any programs implemented to deal with the school run will have on the overall congestion problem. A potential scenario down the road may find commuters that currently use public transit to work noticing the decrease in traffic congestion, getting back into their cars and driving to work in a sense a backfire of the initial intention. If for nothing else, the encouragement of alternative methods of travel to school promotes better living by introducing regular daily exercise to the students and eliminating levels of air pollution from exhaust emissions. In light of this notion the school run congestion relief program is a truly valid venture but to target the school run as a primary congestion relief vehicle is unfair and unrealistic. The recommendations made will provide a stepping stone towards the goal of decreasing traffic flows, however, the real problem of congestion runs much deeper and if current commuting trends continue along with the modern reliance on the automobile as a means of transportation, no matter how successful the school run program is the issue of traffic congestion will be an ever present problem. ...read more.