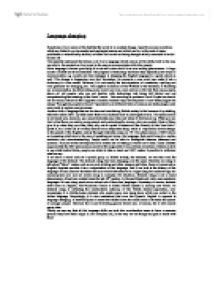 Language changing - Everybody of us is aware of the fact that the world is in constant change.

Language changing Everybody of us is aware of the fact that the world is in constant change. Apart from some evolutions which are linked to environmental and geological causes and which can be, in the most of cases, predictable or scientifically studied; we often find ourselves facing changes strictly connected to social human life. The essential instrument that allows us to live is language which mirrors all the shifts, both in the way we refer to the context we live in and in the way we communicate with other people. Since language is human peculiarity it is not set in stone but it is an ever ending phenomenon. A large number of shifts are to be identified: The progress of technology and these days especially new ways of communication e.g. e-mails and text messages is changing the English language to a great extend as well. ...read more.

Up-talk means that every sentence ends an interrogative tone. This phenomenon is not brand new, however, you cannot definitely say when and where it first turned up. What you can find is that there are mainly young people and predominantly women, who use up-talk. Most of them give it up when they are older, they only use to speak it because all the friends, all the "cool kids " speak it , too. In the UK it is widely held to be an antipodean thing which is responsible for the change in the speech of the English; mainly through Australian soaps on TV. The phenomenon of HRT shows an increasing relativism in the way of speaking and using the language, that could bring to a certain confusion and misunderstanding. People could not be able to distinguish between statement and question. This proves the development of a certain fear of stating in words one's ideas. ...read more.

In the past Greek and Latin were academic languages. So new slang words were coined out of these two languages. Nowadays of course, students draw more on English, Afro-American Creole or black African speech in coining new words. As students slang is reflecting the multicultural make-up of the British student population, now increasingly it is British-Asian students who create many new slang terms which are rooted in the Indian language. Surprisingly it is also maintained that even the Queen's English is exposed to language changing. In fact the Queen's accent has shifted down the social scale of towards the speech of younger people. However she is just following general trends and, of course, she is still sounds upper class. Finally we can say that all the language shifts we took into consideration seem to have a common ground: they have their origin in our everyday life, in the way we see things and get in touch with them! ...read more.