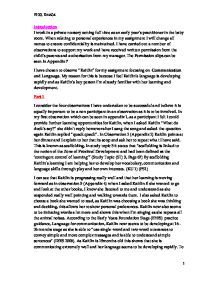 Language Development. I have chosen to observe Kaitlin for my assignment focusing on Communication and Language. My reason for this is because I feel Kaitlins language is developing rapidly

Introduction I work in a private nursery setting full time as an early year's practitioner in the baby room. When relating to personal experiences in my assignment I will change all names to ensure confidentiality is maintained. I have carried out a number of observations to support my work and have received written permission from the child's parents and authorisation from my manager. The Permission slips can be seen in Appendix 7 I have chosen to observe ''Kaitlin" for my assignment focusing on Communication and Language. My reason for this is because I feel Kaitlin's language is developing rapidly and as Kaitlin's key person I'm already familiar with her learning and development. Part 1 I consider the four observations I have undertaken to be successful and believe it is equally important to be a non participant in an observation as it is to be involved. In my first observation which can be seen in appendix 1, as a participant I felt I could provide further learning opportunities for Kaitlin, when I asked Kaitlin "What do duck's say?" she didn't reply however after I sang the song and asked the question again Kaitlin replied "quack quack". In Observation 2 (Appendix 2) Kaitlin points at her dinner and I explain to her that its soup and ask her to repeat what I have said. This is known as scaffolding, In study topic 3 it states that "scaffolding is linked to the notion of the Zone of Proximal Development and had been defined as the 'contingent control of learning'" (Study Topic (ST) 3, Page 67) By scaffolding Kaitlin's learning I am helping her to develop her vocabulary, communication and language skills through play and her own interests. (KU 1) (PS1) I can see that Kaitlin is progressing really well and that her learning is moving forward as in observation 3 (Appendix 4) when I asked Kaitlin if she wanted to go and look at the other books, I know she listened to me and understood as she responded really well pointing and walking towards them. ...read more.

This would put the children at a better advantage and also support the common core framework in Multi-agency working. "To work successfully with children and young people it is important to be clear about your role and to be aware of, and respectful of, the roles of other workers and agencies. You should actively seek and respect other people's knowledge and input to deliver the best outcomes for children" (http://www.dcsf.gov.uk/everychildmatters/strategy/deliveringservices1/commoncore/multiagencyworking/commoncoremultiagencyworking/) (KU5) (PS1) From carrying out the activity I can then evaluate whether or not it was successful (see appendix 3). My next observation in appendix 2 I felt Kaitlin was very good at communicating with adults and enjoyed one to one interaction so I then planned an activity (see appendix 3) to see how well Kaitlin could communicate independently. From the activity plans in appendix 3 I carried out two observations. In observation 3 (appendix 4) Kaitlin chose a book which she wanted me to read (Old Mac Donald's farm). Kaitlin seemed to enjoy this book as she was repeating the animal noises I made. To help further Kaitlin's learning I completed another activity plan (appendix 6) which I believe would continue Kaitlin's learning as it links together with the story playing with animals and natural materials, this would give Kaitlin the opportunity to reflect on the story we read and interpret it in her own way. In observation 4 (appendix 5) Kaitlin only seemed to play with the toys for a short period of time then sat down on a rocking chair and began to sing "row row" This told me that Kaitlin likes to sing and to help her develop further I decided to do another activity plan for singing which can be seen in appendix 6. From participating in observations 1,2 and 3 (appendix 1,2 and4) I believe I have successfully achieved Maggie Maclure's four key strategies for supporting children's language. ...read more.

I say "Oink Oink" Kaitlin smiles. On the last page there is a picture of all the animals. I ask Kaitlin to point at the chicken. Kaitlin looks at the pictures and correctly points to the chicken I continue to ask her where all the animals are and Kaitlin correctly points at them all (Pig, Cow, Duck, Sheep, Tractor and the Man) When I ask Kaitlin to say their names Kaitlin just smiles and points at the picture. Next step - As Kaitlin seemed very engaged with this book next time I will create a small world area using natural materials and animals for her to explore. Appendix 5 Observation 4, Free Play Date - 9th April 2010 Time commenced - 10.20am Time Completed - 10.25am Method - Focused, Non Participatory observation Technique - Essay Permission sought from - Manager and the child's parents. Description of setting - Inside the nursery, in baby room, with 4 other babies nearby and a variety of different toys in each area. Age of Child - Fifteen months Observation Kaitlin is sat down near the toy telephones, Kaitlin presses some buttons on the phone and it begins to ring. Kaitlin now holds the phone to her ear and says "ellooo" and puts the phone back down again. Kaitlin repeats this two more times. Kaitlin now picks a ball up and throws it back down and begins to laugh. The ball rolls towards the rocking chair. Kaitlin now gets up and walks to the chair and holds the seat and begins to rock it for a little while. Kaitlin now climbs onto the chair, sitting down and looks around the room giggling and smiling. Kaitlin now holds on to the arms of the chair and begins to rock slowly. Kaitlin now says "Row Row". Next step - To do more singing with Kaitlin and learn more words and actions. *Continue to repeat songs* ?? ?? ?? ?? E100, TMA04 1 ...read more.