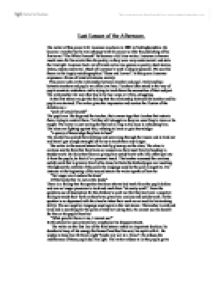 Last Lesson of the Afternoon By D.H. Lawrence

Last Lesson of the Afternoon. The writer of this poem D.H. Laurence was born in 1885 in Nottinghamshire. He became a teacher but he was unhappy with his career so after the publishing of his first novel "The White Peacock" he became a full time writer. Laurence is known much more for his novels than his poetry, as they were very controversial and stole the limelight. Laurence had a lot of talents as he also genres as poetry, short stories, letters, essays and travel. Much of Laurence's work is deeply personal. We see this theme in the largely autobiographical "Sons and Lovers". In this poem Laurence expresses a frame of mind of extreme anxiety. This poem looks at the relationship between teacher and pupil. Relationships between teachers and pupils are often love hate. Teachers often stand in the way of pupils wants to misbehave while trying to teach them the necessities of their subject. The relationship like any other has to be two ways or it fails, struggling. In the first stanza we get the feeling that the relationship between the teacher and his pupils are strained. The writer gives the impression and creates the illusion of the children as a: "pack of unruly hounds" The pupils are like dogs and the teacher, their owner tugs their leaches that restrain them, trying to control them. ...read more.

He questions why he should care about correcting their mistakes. He senses a feeling of futility, he tells of how he feels his teaching s going down into "abyss" and disappearing. By the fifth stanza the writer has lost all worth of teaching and feels no responsibility for caring if they can do their work. "What does it matter to me," The pupils are working on writing a description of a dog this suggests that the pupils are either young or weak making their work to him mundane. He yet again questions why he continues with this. He uses a colloquialism, a common expression to express that it's all the same, that there's no point: "it is all my aunt!" While by society he is supposed to care, it's his job to care and put his mind, body and soul into teaching and expanding their minds he realizes this but cannot cope. In the last stanza he shows great negativity and stubbornness: "I do not, and will not; they won't and they don't. He feels that he cannot change them by doing anything, he is very futile. There is an uncross able gulf between the teacher and the pupils, he feels they are from two different planets. ...read more.

It is obvious that the pupils resist the control of the teacher so like the rhyme scheme it is not in order. Throughout the poem the tone expressed is bitterness. There is a feeling of desperation at the thanklessness expressed in the teachers work. There is an underlying feeling of stubbornness, determination and resilience to their imperfections. In the third stanza he is determined to take: "My last dear fuel of life to heap on my soul And kindle my will to a flame" The teacher is determined to withhold his energy from his pupils and use it on his soul. He has decided to keep his energy for himself and will no longer waste it on worrying about his class. His external senses have been dulled by the indifference between them, but he will kind his flame. The only middle ground that unites them is they both are waiting for this class to end: "When will the bell ring, and end this weariness?" This poem deals very well with a failed relationship and a lack o understanding between two groups of people. The pupils do not appreciate there given education but there is a feeling that the work is mundane: "What does it matter to me, if they can write A description of a dog, or if they can't?" Perhaps just like their teacher they too have become disillusioned. By Diane Smith. ...read more.