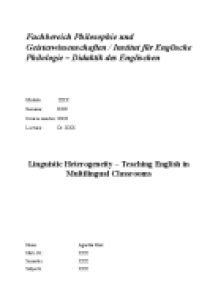 Later on, during the 1990s, this concept has been adopted more and more to the field of foreign language teaching and its methodology. In general, Language Awareness can be defined as “explicit knowledge about language, and conscious perception and sensitivity in language learning, language teaching and language use” (ALA – Association for Language Awareness, no date: online). The development of this awareness comes into being when the mother tongue is recognized and internalized in contrast to the language taught (Schmid-Schönbein, 2001: 55). Accordingly, the LA concept, amongst others and according to Baker and Prys Jones (1998: 628), aims at: * making the students’ implicit first language knowledge explicit, * the establishment of an active acceptance of lingual diversity and variety, * strengthening lingual analytical skills (e.g. language system, structure and use), * fostering an awareness of verbal action in a sociocultural context to promote “better relationships between ethnic groups” (Baker and Prys Jones, 1998: 628). In order to achieve these goals, it was suggested to establish five domains of Language Awareness (Baker and Prys Jones, 1998: 632): 1. The affective domain, which affects the students’ emotional side by inter alia forming certain attitudes and developing sensitivity. 2. The social domain refers to the relationship between sender and receiver for the purpose of a social harmonization by fostering an understanding of language diversity. 3. The power domain deals with the critical approach of texts by sensitising the learners to the awareness that language can be used as a tool to inform but also to manipulate, and finally aims at fostering a social and political awareness. 4. The cognitive domain aims at the pupils’ intellectual penetration of the language system including its categories, rules and patterns. 5. The performance domain describes that the knowledge of how language works also affects the learner’s language performance for the purpose of an improved efficiency and proficiency. The advantages the LA concept offers for the use in a multicultural classroom that includes L3 learners who may already struggle to manage ...read more.

By examining language in an analytical and critical way, pupils are trained to understand language in its entire system including its categories, rules and patterns and its sociocultural context. Furthermore, a great potential to transmit and strengthen new knowledge about the target language English lies in the direct and crosslinguistic comparison of languages. The learners? entire linguistic repertoire is taken into account to stimulate an explicit awareness of their knowledge about languages and also to work towards an improvement of the pupils? language skills and the understanding of the new subject matter. In addition, an appreciation of the pupils? already existing linguistic knowledge can also stimulate the learners? motivation. Two different examples were used to show how to integrate this concept into English teaching. The first aimed at explicitly supporting a grammar unit. By carrying out a direct comparison between different languages, the pupils? mother tongue was integrated into a specific exercise for the purpose of sustainably teaching the structure of the simple past. The second example was recommended to foster awareness of verbal actions and their meaning in a sociolinguistic context. The comparison between proverbs from different origins and languages aimed at creating awareness and sensitivity regarding a cultural related use of language. It also aimed at fostering an awareness for language specific characteristics like figurative meanings which can possibly cause misunderstandings between speakers. Additionally, this activity can be seen as a good possibility of extending the pupils? linguistic repertoire in the target language English by working with new phrases in detail. Both examples made clear, that the LA concept offers manifold applications for the EFL classroom. Being aware of the concept?s versatile possibilities and its potential to foster the pupils? English skills can be a step towards fulfilling the curriculum framework?s goal of building up an individual multilingualism in multicultural classes. Nevertheless this concept should not only be applied in foreign language lessons to improve the pupils? L3 skills, but rather interdisciplinary to strengthen the learners? L2 skills by including the knowledge about their mother tongue into individual learning processes. 1. ...read more.