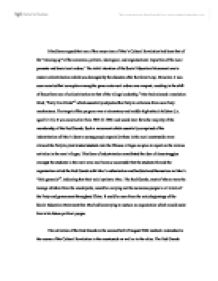 It had been argued that one of the many aims of Mao's Cultural Revolution had been that of the "cleaning up" of the economic, political, ideological, and organisational impurities of the rural peasants and basic-level cadres.1 The initial intention of the Social Education Movement was to restore collectivisation which was damaged by the disasters after the Great Leap. However, it was soon revealed that corruption among the grass-roots rural cadres was rampant, resulting in the shift of focus from one of collectivisation to that of the village leadership.2 Mao had released a resolution titled, "Early Ten Points"3 which essentially subjected the Party to criticisms from non-Party mechanisms. The target of this program was at elementary and middle high school children (i.e. aged 12-14). It was most active from 1933 till 1966 and would later form the majority of the membership of the Red Guards. Such a movement which essentially comprised of the indoctrination of Mao's ideas to young people especially those in the rural countryside areas allowed the Party to plant trusted students into the Chinese villages as spies to report on the various activities in the rural villages. ...read more.

Closely related to this was the brain-washing campaign that Mao had implemented on the students. The result of such activities would probably be that of a senseless following of Mao's ideas. The fact that Mao was worshipped till such an extent inevitably had to be accredited to his indoctrination and brain-washing campaigns. As former Red Guard, An Xi Jiang admitted, "Thinking back, I think maybe we were brainwashed"8. One can thus see the extent of the brain-washing campaign which Mao had instigated during his term as Chairman in the Communist Party. The revolution in its initial stages had not been that widespread and was largely an urban phenomenon. Indeed, throughout the first two and a half years of the Cultural Revolution, much of what had happened in the urban cities was not peripheral to most of rural China's day-to-day activities. However, revolutionary leadership undertaken by the Communist Party had encouraged the Red Guards to "take Beijing to the rest of the country"9 and spread the revolutionary fervor across China's vast countryside and get the people into the class struggle. Following Mao's address of the Red Guards in Tiananmen Square in August, means of mass communications such as the radio and telephone helped spread news of the struggle at Beijing University to the ordinary masses, without the need for top level intervention. ...read more.

The creation of the Peasants Associations was an initiation made by the Party cadres and not by the peasants themselves. It was only when the program was well advanced that peasants began to play a more significant role. The Peasants Association was responsible for "re-educating the backward and conservative" rural masses to make them aware of their class responsibility in the world struggle against feudalism, capitalism and imperialism. Peasant indoctrination was also an essential component in these associations. Hence it was easy to see that the control of the masses had been essentially a decision implemented from the top in the Party and it was these people's organisations which helped to ensure that it was brought to the rest of the people at the bottom. (1927 words) 1 Thomas Robinson, The Cultural Revolution in China, (Berkeley and Los Angeles: University of California Press, 1971), p. 373 2 Jack Gray, Rebellions and Revolutions, (Oxford, Oxford University Press, 2002), p. 324 3 Ibid., p.325 4 Robinson, "Cultural Revolution in China", p. 378 5 http://www.rwor.org/a/v20/960-69/966/redgrd.htm 6 http://news.bbc.co.uk/hi/english/static/special_report/1999/09/99/china_50/little.htm 7 http://www.rwor.org/a/v20/960-69/966/redgrd.htm 8 http://news.bbc.co.uk/hi/english/static/special_report/1999/09/99/china_50/red_guard.htm 9 http://www.rwor.org/a/v20/960-69/966/redgrd.htm 10 http://www.rwor.org/a/v20/960-69/966/redgrd.htm 11 Peter S.H. Tang and Joan M. Maloney, Communist China: The Domestic Scene 1947-1967, (South Orange, New Jersey, Seton Hall University Press, 1967), p. ...read more.