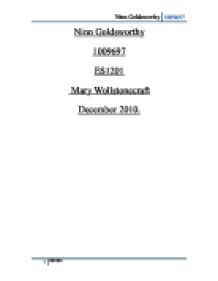 Mary Wollstencraft. I will focus on educator Mary Wollstonecraft and her work A vindication of the rights of women.

Ninn Goldsworthy 1009697 ES1201 Mary Wollstonecraft December 2010. Within this essay, I will focus on educator Mary Wollstonecraft and her work 'A vindication of the rights of women'. Mary Wollstonecraft was born in 1759, an although largely self-educated, she wrote several books including the much publicised 'A vindication of the rights of Women' which was published in 1792, and of which research for this essay was taken from. Mary grew up in various places in England on farms run by her parents. Due to the erratic and often violent nature of her father, Mary often had to intervene in fights between her parents, and is quoted as '...remembering her father as tyrannical, her mother....was too willingly his victim.' (1: Wollstonecraft; 1792) Mary and her family moved from place to place as each farm that her parents ran, failed in prosperity and her father's inheritance started to run out. After leaving home, Mary worked in several jobs deemed suitable for the female, such as baking and dressmaking. She worked as a companion to an elderly widow in Bath before returning home to nurse her dying mother, and after her mother's subsequent death, Mary supported her father and paid for her younger siblings' education. Mary encouraged her Sister to leave her unhappy marriage and her new baby as she was unhappy and depressed. ...read more.

This is the very oppression that Mary Wollstonecraft proposed to end, that women are treated as nothing more than mere ornamental objects, there to serve their husbands and carry the blood line heirs to nobleman ship. Women must not have a presence thus they be judged. It could be argued that Mary Wollstonecraft primarily wrote 'A vindication of the rights of women' in response to the writings of Jacques Rousseau in his book 'Emile'. A book that appears to summarise man and also illustrates how a good citizen might be educated. An overall impression of 'Sophie' with in the writings is that of one of submissiveness and servitude. Rousseau gives the impression that a girl's education should be one aimed at making her useful and supportive to her husband and for no other reason. This can be construed as obvious to the reader when one reads 'A vindication of the rights of women' especially chapter two entitled 'The prevailing opinion of a sexual character discussed' (8: Wollstonecraft; 1792) where Rousseau is cited on more than several occasions. Another opinion could be that it is a response to a society where the privileged and educated man has systematically denied the education and autonomy to women. Whatever the opinion of reason may be, as quoted in the introductionary chapter of the 1992 version of 'A vindication of the rights of women' ' Mary Wollstonecraft's own experience from childhood ...read more.

Two hundred years after her death, Mary's work is still celebrated and cited as being amongst the first feminist literature. It is to note that, her second child, a girl also called Mary, would go onto write one of the most famous works of Gothic literature written by a woman... Mary Shelley's 'Frankenstein'. To summarise, Mary Wollstonecraft identified problems with education in society as one that favoured boys and left out girls who were deemed as the weaker sex. She theorized that education for women would make them stronger and less reliant on their husbands and able to carry out their motherly tasks more efficiently. In retrospect, Mary had written an entire manifesto on female rights and campaigned for better education for all as well as equality. If Mary Wollstonecraft were alive today, would she be happy to know that her proposed changes are mainly implemented in today's education? The theoretical answer could be yes, but today's society is much different than that of the eighteenth century. Different problems for a different culture altogether. Today's society oversees just as much poverty and class systems and unfair educational practises as did then. Mary would hopefully be proud that girls now attain better than boys and many a highly educated women is in a position of authority. 'A vindication of the rights of women' was only the beginning. ...read more.