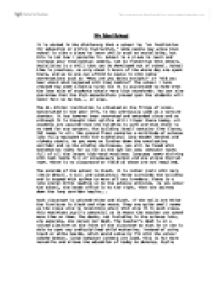 My Ideal School It is stated in the dictionary that a school is: 'an institution for educating or giving instruction.' Some people may argue that school is also a place to learn skills such as socialising, but this is not how I perceive it. School is a place to learn and increase your intellectual powers, not to fraternise with others. Socialising is a skill that can be developed out of school. School time is precious, as only about 5 hours of the whole day are spent there, and so no one can afford to waste it with petty conversations such as 'What are you doing tonight?' or 'Did you hear about what happened with Greg Hamble?' The school I have created may seem slightly harsh but it is guaranteed to make even the less able of students obtain very high standards. You can also guarantee that the high expectations placed upon the students will never fail to be met... or else. The St. Minion Institution is situated on the fringe of Luton. Constructed in the year 1876, it was previously used as a torture chamber. It has however been renovated and extended since and so although it is thought that spirits still linger there today, all students are assured that the building is safe and that there is no need for any concern. ...read more.

The day will therefore end at 2:15pm. Except, that is, on a Wednesday when there will be a half-hour assembly in the main hall. In this case, the day will end at 2:45pm. Students who attend The St. Minion Institution will be restricted on what they can eat. They need to eat healthily to prevent their brains getting clogged up with fat, sugar and e numbers. No fizzy drinks such as Coca-Cola, Lemonade or Orangeade are permitted. Also, drinks containing caffeine such as tea and coffee aren't allowed. If a student is thirsty water, preferably at room temperature, should be consumed. Bread and rice is the staple diet of the students but fruit and vegetables are issued twice a week in order to add a bit of variety. It is vital that no pupil has any more than 8grms of fat per day and so they need to plan their meals very wisely. The teachers at this school are sinister characters and are highly respected by the students. It is obligatory that each teacher be addressed properly by his or her surname. They all wear long dark cloaks and their seemingly pointless brown cotton caps are continuously perched on the top of their heads and shadow their expressionless faces. They wander meaningfully about the school with a high aroma of authority. ...read more.

* 'Sir' is the one most superior to you and should be worshipped twice daily. * The 'right' way to lead your life is by working hard and treating others with respect. * It is bad and wrong to be creative. It goes against all 'Sir' has ever taught you. * You must never smile. It is just a front and will not fool anyone. 'Sir' must be worshipped by kneeling on the floor and bowing the head. Deep breaths are taken and images of 'Sir' should float through the head. The students should feel fear at the sight yet feel privileged to be there with him. These basic beliefs must be followed and learnt off by heart. They are important as they make the students who they are. The St. Minion is not very realistic at all and could never exist. It is far too harsh and shallow minded. It forces people to live in a way in which they may not want to and doesn't let the students have an opinion on what they think, eat, wear etc. What it does provide is a place to learn, although the balance between work and play is completely one way. I would never want to go to this school and I don't think anyone else would either. I think it is impossible to create the 'perfect' school, as everyone perceives their 'perfect' school in a different way and so one specific school would never satisfy everyone. It was quite fun trying though. By Kim Mueller 10EH ...read more.