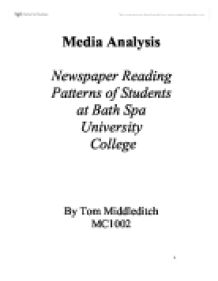 Media Analysis Newspaper Reading Patterns of Students at Bath Spa University College By Tom Middleditch MC1002 Introduction In order to carry out my media analysis I have selected the topic of newspapers. Newspapers are a form of media that communicate with the general public and displays what they believe to be critical information in order to let their readers know what is going on in the world or local community. Newspapers give the general public the opportunity to make decisions and form opinions, and read everyday by the majority of people in Great Britain. There are two main types of newspaper broadsheets and tabloids... I'm going to investigate whether students at Bath Spa University College read newspapers on a regular basis, and if so whether they favour tabloids or broadsheets. Much is publicised about students not being as intellectual as they used to be, and as an article in The Telegraph December 1999 suggests they are all 'tabloid reading couch potatoes'. I wanted to find out the portrayal the media gives of students was true, and was interested to see how many students if any read broadsheet newspapers. From a personal point of view I also thought it would be interesting to see what my fellow students read in comparison to me, and to see the difference in reading patterns between male and female students. In order to find out this information I needed to decide on the methodology I was going to use. ...read more.

I also made the decision of asking students from Bath Spa University at random. I decided on randomly selecting people as I thought this would make the results more valid. I also believed participants would be more likely to take it seriously and therefore be more truthful than people I knew would. My piece of research was titled 'Newspaper reading patterns of students at Bath Spa University College'. I therefore wanted to make sure that all a participants of the interview were actually students at the university. In order to do this before interviewing people I asked them an initial question of 'Are you studying here at Bath Spa?' Once I had decided the method and the amount of people I was going to interview it was time to start designing my questionnaire. As mentioned in the introduction I wanted to make the questions short and brief in order to cause as little confusion as possible. The first question was an obvious but important one and I didn't even need to ask the participant. It was to find out whether the student was male or female. This question would prove clinical later on when analysing the difference in reading patterns between the two sexes at Bath Spa University. The second question was to find out on average how often students read a newspaper. Question number 3 was to find out whether the student tended to read tabloid or broadsheets newspapers, the answer to this question would enable me to see if the article printed in The Telegraph about students being 'Tabloid readers' was justified. ...read more.

Another aspect that might have affected the results was the timing of my interviewing. As I did all the interviews at the same time, it is therefore a possibility that the students that participated in my research particpate in the same or similar subjects. This could well mean they have similar reading patterns. I know this is only a possibility but it is something that must be taken into consideration, when analysing the results. To improve this I could have done interview at different times of the day and week. That also brings me to the point, that I could have well had more questions in my interview. For instance what subject area the participant is part of. I feel it would be interesting to see if students studying the same subjects have the same or similar reading patterns. Although I feel my decision to keep the interview short and brief was justified, I do however acknowledge the fact that more questions would have improved the study. The target audience for my study was students at Bath Spa University. If I were to carry out this study on a larger scale, it would be interesting to make comparisons between the reading patterns of different universities, different ages and even different social groups. For example, a comparison between teachers and students would be extremely interesting. Despite suggesting all these improvements I could have made, I do still feel that my research is valid and adequate for this particular study and I am pleased with the overall outcome. ...read more.