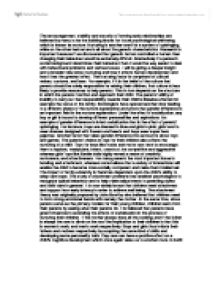 The encouragement, stability and security of forming early relationships are believed by many to be the building blocks for future psychological well-being which is known as nurture. Nurturing is another word for a system of upbringing, while on the other had nature is all about the genetic characteristics. Research is important because if we discovered that genetic factors controlled a human then changing their behaviour would be extremely difficult. Alternatively if a person’s social background determines their behaviour then it would be way easier to deal with behavioural problems and various issues. I will be giving a deeper insight and a broader view about nurturing and how it affects human development and how it has the greatest affect. The nurturing factor is comprised of cultural values, customs, and laws. For example, if it is the belief of the culture that parents should be solely responsible for raising their children, that culture is less likely to provide resources to help parents. This in turn depends on the structure in which the parents function and approach their child. The parents’ ability or inability to carry out that responsibility towards their child is likewise affected for example the status of the family. Sociologists have opened another door leading to a different phase of the nurture explanation and prove that gender difference is an important field in the nurture explanation. Under the effect of socialization, any boy or girl is bound to develop different personalities and aspirations. An example of gender difference is infant socialization that is the effect of parents’ upbringing. For instance, boys are dressed in blue and girls in pink; girls tend to wear dresses designed with flowers and hearts and boys wear super hero pajamas. Another factor that takes gender difference into account is about toys and games. The parents’ choice on toys for their children also affects the nurturing of a child. Toys for boys like trucks and motor cars tend to encourage them to explore, manipulate, invent, construct; be competitive and aggressive whereas girls’ toys like Barbie dolls highly reveal a sense of creativity, nurturance, and attractiveness. For many parents the most important issue is bonding and attachment, whereas some believe that a variety of interactions will enable the child to become more socially competent and make them intellectual. The impact of family adversity is therefore dependant upon the child’s ability to adapt and cope. The study of attachment problems has enabled psychologists to recognize typical behaviour and to help make adjustments to parenting styles and child care in general. It is now widely known that children need attachment and support from early infancy in order to achieve well being. The attachment theory was originally proposed by John Bowl by who believed that children need to form strong emotional bonds with namely the mother. At the same time, since parents serve as the primary models for their young children, children learn from their parents by seeing what their parents do. It is believed that parents have great influences in extending the effects of socialization in the process of nurturing their children. If the mother always does all the cooking and if the father is always the one to climb on the roof the implication to their children is that this is women’s work; and men’s work respectively. Boys and girls thus imitate their fathers and mothers respectively by acquiring the same kind of skills and developing same personality traits. Day care can have a positive affect on a child’s cognitive development which once again takes us to another route to instill another good quality in a child which in turn contributes to nurturing. Those children who had experienced day care in nurseries proved to have better verbal abilities than the others. This therefore, shows that day care is a positive move. Maternal sensitivity and poor quality day care are two factors that do not appear to affect development. Not to forget emotional expression is another vital factor. The parents socialize the boys by encouraging them from a very early age to express certain types of emotions but not others, like fearfulness. Research in 1974 and in 1995 showed that parents, especially fathers, describe newborn girls as softer, finer-featured, smaller, weaker, and more delicate than boys. In addition, they think that it is natural for boys to be ill-mannered and aggressive. Yet parents have to ensure that girls have to be polite, gentle and quiet. All these observed behaviors are obviously not because of genetics and are not preceded when they were babies, it is the parents who think their sons should behave in these ways, and therefore they treat them in such a way that elicits these behaviors and altitudes. Most assessments of childhood behaviour have been based upon rating scales completed by parents, teachers or psychology professionals who have proved and explained that it is every parents duty to foster societal attitudes that value work done on behalf of children at all levels :whether it be the parents, teacher or staying in an extended family .