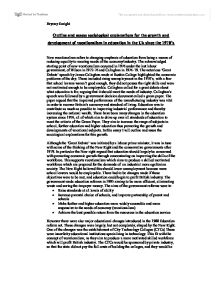 Outline and assess sociological explanations for the growth and development of vocationalism in education in the Uk since the 1970's New vocationalism refers to changing emphasis of education from being a means of reducing equality to meeting needs of the economy/industry. The acknowledged starting point of new vocationalism occurred in 1976 under the last labour government, of Wilson in 1972-76 and Callaghan in 1976-79. The notorious 'Great Debate' speech by James Callaghan made at Ruskin College highlighted the economic problems of the day. These included rising unemployment in the 1970's, with a fear that school leavers weren't good enough, they did not posses the right skills and were not motivated enough to be employable. Callaghan called for a great debate about what education is for, arguing that it should meet the needs of industry. Callaghan's speech was followed by a government decision document called a green paper. The paper argued that the improved performance of the manufacturing industry was vital in order to recover Britain's economy and standard of living. Education was to contribute as much as possible to improving industrial performance and thereby increasing the national wealth. ...read more.

The aims of the government reforms were to: * Raise standards at all levels of ability * Increase parental choice of schools, and improve partnership of parent and schools * Make further and higher education more widely accessible and more responsive to the needs of economy (vocationalism) * Achieve the best possible return form the resources in the education service However there were also major educational changes introduced in the 1988 Education reform act. These changes were largely, but not completely, shaped by the New Right. One of the changes was the establishment of City Technology Colleges (CTCs) These were inner0city educational institutions specializing in technology. This fit with the concept of vocationalism, as they aim to produce a more motivated skilled workforce which will profit British industry. The CTCs would be sponsored by private industry, so that the state did not pay the full costs of building the colleges, and they would be independent of LEAs. The Technology Colleges would cater for the 11-18 age groups and compete with existing state schools. However only 15 CTCs were ever established this was largely because of the lack of financial support from companies who it had been hoped would make substantial contributions to help set up CTCs. ...read more.

CPVE taught practical skills, but could be combined with taking exams in traditional subjects, although in practice it tended to be taken by pupils who were unsuccessful in the compulsory period of education. The CPVE was not a great success and was later replaced by other vocationally orientated qualifications such as GNVQs and NVQs. In 1986 the national Council for Vocational Qualifications was setup, with the aim of introducing standardized vocational qualifications related to working in particular occupations. By 1990, about 170 NVQs (National vocational Qualifications) had been established, with more being added to the list as time progressed. NVQs are intended to reward practical achievement, with qualifications being gained by demonstrating 'competencies'. NVQs have four levels, ranging from level 1 (the equivalent of GCSE) to level 4 (the equivalent of postgraduate-Level study. After an initial two year pilot scheme, GNVQs were introduced nationally in 1993. These were intended to provide a vocationally-orientated alternative to traditional academic exams such as GCSEs and A-Level. In conclusion there have been many changes in the education system towards vocationalism. Many of these have been to advantage British industrial society. The aim is to produce a motivated, skilled workforce which will be competent within a working environment due to the educational changes which encourage practical qualifications. Bryony Enright ...read more.