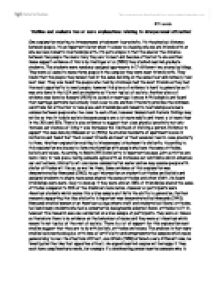 'Outline and evaluate two or more explanations relating to interpersonal attraction' One explanation relating to interpersonal attachment is proximity, it's the physical distance between people, it's an important factor when it comes to choosing who we are friends with or who we have romantic relationships with. It's quite simple in that the smaller the distance between two people the more likely they are to meet and become attracted to one another. Some support evidence of this is by Festinger et al (1950) they studied married graduate students, The students were randomly assigned apartments in 17 different two storey buildings. They were all asked to name three people in the complex they were most friendly with. They found that the people they named lived in the same building on the same floor and normally lived next door. They also found the people who lived by stairways had the most friends as they had the most opportunity to meet people; however this piece of evidence is hard to generalise as it was only done in the USA and on students so it's not typical of society. ...read more.

According to this explanation we choose to form relationships with people who have the same attitudes, beliefs and values. According to Rubin (1973) similarity is important because joint activities are more likely to take place, having someone agree with us increases our confidence which enhances our self esteem. Similarity will also make communication easier and we may assume people with similar attitudes will like us, so we like them. Some evidence of this explanation was demonstrated by Newcomb (1961), he got information on student's attitudes and beliefs and assigned students to share room some shared the same attitudes and other didn't. He found friendships were more likely to develop if they were similar. 58% of friendships shared the same attitudes compared to 28% of the dissimilar room mates. However all participants were American students which makes this a bias sample and limits the ability to generalise. Further research supporting the idea similarity is important was demonstrated by Newcomb (1943). ...read more.

Overall it is clear that no single explanation is capable of standing alone, interpersonal attraction involves a combination of factors. Proximity is needed to meet people and for a relationship to develop. Familiarity is the frequency of interactions as it allows us to meet people and get to know them. Physical attractiveness has been shown to influence our decision about who we start a relationship with and even more so similarity and matching hypothesis. However much of the research is artificial, physical attractiveness is based on artificial situations so it effects generalising to real life situations and much of the research was done on students, so it is not representative of society. A key criticism is one of cultural bias, there is failure to realise the differences between cultures, much of the research was carried out in the UK or USA and findings may not be true of other cultures. Explanations like proximity, familiarity and physical appearance may not apply to cultures where arranged marriages are the norms and where relationships are considered permanent. ?? ?? ?? ?? 871 words ...read more.