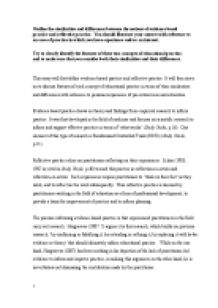 Outline the similarities and differences between the notions of evidence-based practice and reflective practice. You should illustrate your answer with reference to an area of practice in which you have experience and/or an interest.

ï»¿Outline the similarities and differences between the notions of evidence-based practice and reflective practice. You should illustrate your answer with reference to an area of practice in which you have experience and/or an interest. Try to clearly identify the features of these two concepts of educational practice, and to make sure that you consider both their similarities and their differences. This essay will first define evidence-based practice and reflective practice. It will then move on to discuss features of each concept of educational practice in terms of their similarities and differences with reference to personal experience of pre-school care and education[a]. Evidence-based practice draws on theory and findings from empirical research to inform practice. It was first developed in the field of medicine and focuses on scientific research to inform and support effective practice in terms of ‘what works’ (Study Guide, p.16). One element of this type of research is Randomised Controlled Trials (RCTs) (Study Guide, p.21[b]). Reflective practice relies on practitioners reflecting on their experiences. Schön (1983, 1987 as cited in Study Guide, p.40) termed this practice as reflection-in-action and reflection-on-action. Such experiences require practitioners to ‘think on their feet’ as they work, and to reflect on the work subsequently. Thus reflective practice is deemed by practitioners working in the field of education as[c] a form of professional development, to provide a basis for improvement of practice and to inform planning. The premise informing evidence-based practice is that experienced practitioners in the field carry out research. ...read more.

It is suggested, however, that Moore (2007) is taking a simplistic standpoint. While evidence-based practice may be criticised for its ?top-down? approach, and the ?validity of research findings? (Study Guide, p.34) may be privileged over that which inform practitioners in their work settings, it could be argued that all research is value laden and the power imbalance may not be as significant as suggested[l]. This essay will now move on to discuss differences between the notions of evidence-based practice and reflective practice. Hargreaves (2007) argues that evidence-based research in education lacks the input of practitioners working in the field (p.9). Such lack of participation by practitioners, he suggests, adversely affects the improvement of educational practice. Hargreaves (2007[m]: 3) claims that if education were a research-based profession, it ?would be more effective and more satisfying?. Making this claim, he compares education unfavourably with medicine. He suggests that it is through evidence-based practice that practitioners gain respect of policy makers because such practice is open to ?evidential test? (p.12[n]). An example of evidence-based research is highlighted in the dominant tradition within the study of developmental psychology to measure children?s capabilities or milestones in terms of their age, for example Piaget?s (1896-1980) stages of development were based on children?s capabilities at different ages. His theory and that of other developmental psychologists has greatly influenced many researchers and provides a basis for selecting age as a means of determining competency in young children. Therefore, within early years settings, resources are frequently presented to children to promote and extend learning in terms of age categories. ...read more.

of teaching and education as a science. Yet it can be argued that education is both an art and a science, where it is necessary to combine the complementary factors of reflective-based practice and evidence-based practice in order that teachers may ?understand their own historical positioning and developments as much as they are able, in addition to trying to understand how their pupils ?tick?, and for researchers to explore not only social interactions but also the discourses and contexts within which those interactions take place? (p.135[t]). To conclude, this essay has discussed the similarities and differences between the notions of evidence-based practice and reflective practice, taking into account educational practice in early years settings. The essay has taken into account the arguments of various contributors to the Study Guide and Reader who posit the idea that evidence-based and reflective-based practice is not a dichotomous concept. Examples based on personal experience and based on the Irish curriculum framework and guidelines have explored this argument. In discussing both concepts, it could be concluded that both the similarities presented and the differences analysed present the idea of research having a cyclical nature, whereby collective reflective practice produces evidence-based practice, which in turn stimulates further reflective practice. From the evidence provided, it can also be concluded that while both practices have diverse origins, the stance taken in their application also produces similarities in their interpretation. Therefore, they are both relevant and have a necessary application in the field of education[u]. Total No. ...read more.