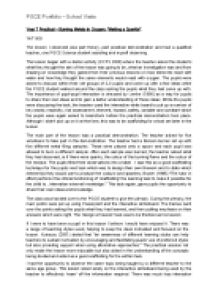 ﻿PGCE Portfolio ? School Visits Year 7 Practical ? Burning Metals in Oxygen: ?Making a Sparkle? 14/11/08 The lesson I observed was part theory, part practical demonstration and had a qualified teacher, one PGCE Science student assisting and myself observing. The lesson began with a starter activity (DCFS 2008) where the teacher asked the students what they thought the aim of the lesson was going to be, what an investigation was and from drawing on knowledge they gained from their previous lessons on how elements react with water and how they thought the same elements would react with oxygen. The pupils were asked to discuss within their set groups of 2-3 pupils and come up with a few ideas while the PGCE student walked around the class asking the pupils what they had come up with. The importance of pupil-pupil interaction is stressed by Lemke (1990) as a way for pupils to share their own ideas and to gain a better understanding of those ideas. While the pupils were discussing the task, the teacher used the interactive white board to put up a number of key words; reactivity, risk assessment, element, hazard, safety, variable and constant which the pupils were again asked to brainstorm before the practical demonstration took place. Although I didn?t pick up on it at the time, this was to be scaffolding for a task set later in the lesson. ...read more.

P1: Oh, heat sir! T: That?s right. Now, one last thing before we move on. Can anyone tell me where the energy COMES from? You?ve already said the battery, but what energy transfer is going on there? P3: Is it chemical sir? From listening to the way the teacher handled the misconception I felt confident that the whole class, especially the pupil who had first raised the problem had gone away with a better understanding of the way circuits work and how these concepts link in with other topics which they had studied. With regards to the learning demand, this was clearly established; that everyday the pupils see that energy is used up, whereas in science, energy is only conserved and transferred through different systems. Leach and Scott (2000) use this topic as an example of identifying the learning demand of a group ?...a comparison between everyday and scientific notions of energy will provide insights to the nature of the learning demand (for example, in everyday discourse energy is something which gets ?used up?; in science, energy is ?conserved?).? (Leach and Scott, 2000, p8) After addressing the misconception, the teacher went on to describe how the current flows through the circuit, using visual and descriptive aids, likening the flow of current to the flow of a river. By building on previous topics and introducing new ideas in the way he did, I think it enabled the pupils to grasp the topic more thoroughly. ...read more.

The number of students from ethnic minority backgrounds is three times the national average and nearly all the students are from areas where there is a higher than average level of social deprivation. The number of ELAs is forty-seven whilst the number of pupils on the SEN register is under fifty, well below the national average percentage. The Science department consists of 11 staff, 8 permanent teaching staff that are supported by three full time science technicians. The school timetable changes over a two week period and in any given week, Years 7, 8 and 9 will have 3 Science lessons while Years 10 and 11 will have at least one 45 minute lesson of biology, chemistry and physics. The GCSE exam board followed is EDEXCEL and all students study the GCSE in Science with the option to also study for the GCSE Additional Science, leading to two GCSE Science qualifications. All courses are taught in the purpose built labs and all teachers teach all areas up to Year 10 when they move to teach their specialist subject. There are two teachers in the department who teach both chemistry and physics up to A-Level. All subject teachers report to their head of subject and every teacher and technician report to the Head of Science. There are no classroom assistants who work in the department, although in some classes the Head of Science is available as a second teacher. Ofsted Report March 2008 Statutory Inspection Of Anglican Schools Report April 2008 ...read more.