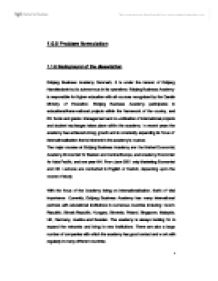 Problem formulation - Background of the dissertation.

1.0.0 Problem formulation 1.1.0 Background of the dissertation Esbjerg Business Academy Denmark, it is under the banner of Esbjerg Handelsskole but is autonomous in its operations. Esbjerg Business Academy is responsible for higher education with all courses recognized by the Danish Ministry of Education. Esbjerg Business Academy participates in educational/trans-national projects within the framework of the country, and EU funds and grants. Management and co-ordination of international projects and student exchanges takes place within the academy. In recent years the academy has achieved strong growth and is constantly expanding its focus of internationalization that is inherent in the academy's courses. The major courses at Esbjerg Business Academy are the Market Economist, Academy Economist for Eastern and Central Europe, and Academy Economist for Asia Pacific, and one year HH. From June 2001 only Marketing Economist and HH. Lectures are conducted in English or Danish, depending upon the course of study. With the focus of the Academy being on internationalization, that's of vital importance. Currently, Esbjerg Business Academy has many international partners with educational institutions in numerous countries including: Czech Republic, Slovak Republic, Hungary, Slovenia, Poland, Singapore, Malaysia, UK, Germany, Austria and Sweden. The academy is always looking for to expand the networks and bring in new institutions. There are also a large number of companies with which the academy has good contact and work with regularly in many different countries. Business Academy recruits students from all over the world, and exchange their students with the relative school. Slovenia, Slovakia, Poland, Russia, and so on. These countries are the main market, which the academy wants to execute recruitment. In latest two years, Business Academy started to recruit students in China, that's very important to investigate the market potentials and the market shares. Because there are more and more people set their vision on study abroad. They want to get the high quality education and a strong diploma. ...read more.

Disadvantages: 1) Because there are very few of colleges have cooperation with some foreign colleges in China. So that is very difficult to make a good cooperation with the Chinese colleges. 2) The time of contact between cooperating schools and EBA will be longer. That means it will take long time for design this distribution channel, and set up the relative system. 7.3.0 Channel - design decisions According to the analysis of channel selecting. We are now identifying EBA's major channel alternatives. EBA should use intermediary companies strategy, it means that use the agent in China. And selective distribution strategy will be fit to EBA to seek the potential market. After that, we should select the channel members. As we introduce above, Sino-Overseas Consultants Company should be selected by EBA. And the strategy for motivating the channel member is reward power strategy. EBA should often pay attention at the intermediary company, it should advert the distribution channel dynamics. 7.4.0 Using the result of the field research We made two open-end questions for our target group. Question 10 and question 11. That ask about what the customers want a intermediary company to do. And what they want to get from a school or a college. With question 11, that is accord to that we described about the channel designing. We think that is very necessary to increase the reliability of an intermediary company. That is normally we talk about the faith. Never ever let any customer get the bad felling about that they think the intermediary company is cheating them. This is the result of the question 8. Figure 7.4.0- Made by Kiki. This figure shows us that most of our customers think just a few of the intermediary company could be believed in. and the real bad indication is that there are few percentage of the customers have been thinking that all of the intermediary companies could not be believed in. ...read more.

Basic on the questionnaire (200 pieces for student, 100 pieces for parents), we interviewed and got the papers back. The effective questionnaires in total are 253 pieces, 191 from students and 62 from parents. We random selected samples in 2 cities; they were Lanzhou City (the capital of Gansu province) and Nanning City (the capital of Guangxi autonomous regions). Also we interviewed a study abroad agent company in Nanning city. That is Sino-overseas Consultants Co., Ltd. The purpose was getting some information about study abroad agent company, interrelated law, policy, and charge of the agent service, etc. The interview in Bank of China was for getting information about the private consumption loan that can borrow money to the student who is going to study abroad. There into the research in two middle schools were unsuccessful, because they were taking an exam in that time. We made 2 kind of questionnaire, one for students, the other one is for parents. But the content of these 2 questionnaires are almost the same. Therefore we only explain the questionnaire which for students. In this questionnaire we've made 15 questions, the example has been show. Of course the language was Chinese when we interviewed and asked our interviewees. There were 3 open-end questions and 12 close end questions. After that we evaluated the opportunities and threats. Opportunities can be classified according to their attractiveness and their success probability. The EBA' s success probability to recruit in China is a little bit higher, compare to the other European countries' schools. But at the same time EBA get the threats from some big developed countries as America, England, Australia, and some EU countries, France, Germany. Finally we give some suggestions for EBA's programme. The main way is the review program. In order to keep looking the achievement the students have got. And in the conclusion we answer the question that asked in the front of the dissertation. Let the while report complete. 4 ...read more.