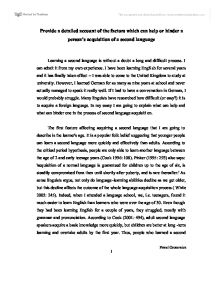 Provide a detailed account of the factors which can help or hinder a person's acquisition of a second language Learning a second language is without a doubt a long and difficult process. I can admit it from my own experience. I have been learning English for several years and it has finally taken effect - I was able to come to the United Kingdom to study at university. However, I learned German for as many as nine years at school and never actually managed to speak it really well. If I had to have a conversation in German, I would probably struggle. Many linguists have researched how difficult (or easy?) it is to acquire a foreign language. In my essay I am going to explain what can help and what can hinder one in the process of second language acquisition. The first feature affecting acquiring a second language that I am going to describe is the learner's age. It is a popular folk belief suggesting that younger people can learn a second language more quickly and effectively than adults. According to the critical period hypothesis, people are only able to learn another language between the age of 2 and early teenage years (Cook 1996: 108). ...read more.

Students with a higher ability to learn a foreign language will acquire it more easily and effectively than those with a worse aptitude in the same learning environment. Considering aptitude, there are three types of learners: * analytic learners - they are sensitive to grammar but do not have a very good memory. They are usually older students. * memory-based learners - they are not really grammar-sensitive but rely on their memory. These students are usually younger. * even learners - they are a mix of analytic and memory-based learners. Students will probably succeed in acquiring a second language if they are either analytic or memory-based learners or if they are a mix of both of them (Cook 1996: 102). What also affects acquiring a second language is the chosen learning strategy. Cook (1996: 104) reports good language learner tips described by Naiman et al. (1978). These are: * developing a learning strategy that suits us; * being involved in the learning process, for example, being active in the classroom, watching television programmes or reading newspapers in L2; * considering the second language as both communication and academic knowledge, not as either of them; * trying to constantly improve our knowledge of the second language. ...read more.

Using the same amount of work and learning in the same environment they will gain a better language proficiency. Such skill is called aptitude. Different people prefer different styles of learning. While learning a second language we need to choose a strategy which suits us best. There are three different types of strategies: cognitive, metacognitive and social. Being a good language learner will help us in acquiring a second language, too. Every student differs in personality and it also has a certain influence on the second language acquisition process. It is believed that extroverts are better at learning a foreign language than introverts (though it is not always true). As linguists have researched, girls happen to be much more interested in language learning than boys (as a result, there are far more female than male students at universities). In my essay I described different features than can help and hinder one in acquiring a second language. I tried to mention as many various things as possible and describe them in a detailed account. I hope that I did it in quite an interesting way and that I proved that even though second language acquisition is a difficult process and some people may seriously struggle in it, we can find ways to make it much easier. ...read more.