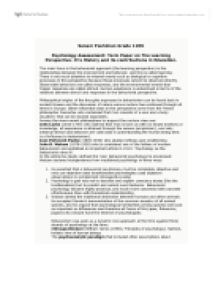 Psychology Assessment: Term Paper on The Learning Perspective- It's History and its contributions in Education.

Sanam Peshiman Grade 11RK Psychology Assessment: Term Paper on The Learning Perspective- It's History and its contributions in Education. The main focus in the behaviorist approach (the learning perspective) is the relationships between the environment and behavior, and this is called learning. There is not much attention to internal events such as biological or cognitive processes in this perspective because these processes cannot be observed directly. Observable behaviors are called responses, and the environmental events that trigger responses are called stimuli. Human experience is understood in terms of the relations between stimuli and responses in the behaviorist perspective. Philosophical origins of the thoughts expressed in behaviorism can be found back in ancient Greece and the discussion of nature versus nurture has continued through all times in Europe. Other influential ideas in this perspective come from the French philosopher Descartes who contended that man consists of a soul and a body (dualism) that can be studied separately. Among the more recent philosophers to support the nurture view are: John Locke (1632-1704) who claimed that man is born as with no innate instincts or knowledge, all experience is attained through the senses (empiricism), and only external stimuli and behavior are valid data in understanding the human being (this is of influence to behaviorism). ...read more.

Behaviorism promised that people could change, i.e. a new order could be created. Behaviorism was especially popular in the US, and in Britain it coexisted with the experimental psychology, but it was not so popular in the rest of Europe. The behavior theorists' interest in the learning process was suited to the intellectual climate during the first part of the 20th century, especially in the United States. This society was so deeply committed to the individual's effort to improve himself by pushing himself on to greater efforts and acquiring new skills - in numerous public schools and colleges, in night classes for immigrants, dance classes for shy, sources for those who wanted friends etc. There was - and in many ways still is - an enormous faith in the near-limitless malleability of human beings, who were thought to be almost infinitely perfectible by proper changes in their environment, especially through education. Under the circumstances, it was not surprising that learning became (and remains) one of the paramount concerns of American psychology. Behaviorism, or the Learning Perspective has contributed to education, work and clinical therapy in extensive ways. It's applications to education have been through: * Classical conditioning: Many stimuli related to school, subjects and teachers start off being neutral stimuli. ...read more.

This means that the teacher organizes the classroom in a way that encourages children to behave well and learn efficiently in the first place. E.g. by positioning the desks in a particular way and making sure the children have something to do as soon as they get in. This reduces the likelihood that bad behavior will occur and have to be dealt with and increases the amount of good behavior, which can be rewarded. * Social learning theory: SLT includes conditioning and observational learning. Many of the above examples of conditioning in education apply here because the reinforcers and punishers are often social ones. SLT adds observational learning to the picture. For this to happen in an educational setting, the learner needs to observe someone who is already skilled. Good examples include the apprenticeship method of instruction, demonstrations and seating a weak child with a stronger one so they can learn more efficiently by observing what the other child does. It is important to remember that models are more likely to be imitated if they were seen as similar to the learner is some way and if they were effective and powerful yet, warm and friendly. Their behavior should be appropriate, novel and consistent over time. These are some of the contributions of The Learning Perspective in education, and how the theories presented can be applied in educational settings. Word count: 1,301 ...read more.