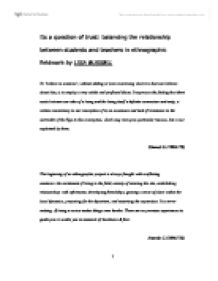 Its a question of trust: balancing the relationship between students and teachers in ethnographic fieldwork by LISA RUSSELL To 'believe in someone', without adding or even conceiving what it is that one believes about him, is to employ a very subtle and profound idiom. It expresses the feeling that there exists between our idea of a being and the being itself a definite connection and unity, a certain consistency in our conception of it, an assurance and lack of resistance in the surrender of the Ego to this conception, which may rest upon particular reasons, but is not explained by them. Simmel G. (1990:179) The beginning of an ethnographic project is always fraught with conflicting emotions: the excitement of being in the field, anxiety of entering the site, establishing relationships with informants, developing friendships, gaining a sense of place within the local dynamics, preparing for the departure, and mourning the separation. It is nerve-racking. & being a novice makes things even harder. There are no previous experiences to guide you or soothe you in moments of loneliness & fear. Antonio C. (2006:724) Analysis Lisa Russell's ethnographic fieldwork provides a "close-up" and "analytic" depictions of social life as she experiences it. ...read more.

In broad terms, by documenting and reflecting on their experience, writers benefit from an enhanced awareness of themselves as people and as professionals, an awareness which makes for more informed professional decision-making (Holly, 1989a).Reflective writing is acknowledged as a useful tool for both promoting and understanding researcher's professional activity and growth. Kulik (1995) argued that "an erotic subjective does things." Kulik believed that "desire (age/sex) experienced in the field seems often to provoke questions that otherwise easily remain unasked, or that only get asked in a rarefied manner" (p. 5). Lisa used age/sex to take advantage of opportunities of common experiences (p. 194) .Age shapes perceptions of the body and its transitions, and informs the language that individuals deploy to speak. Due to her age the students felt, that she would have a fair stance of understanding them. Lisa uses her age to mirror her memories as a teenager and would engulf in participative conversation relating to common issues .She uses her sex as a tool to deploy their underlying emotions. Lisa has used a process of respondent validation (Bloor, 1978), in order to provide some measure of participant control over the research process (p.187) ...read more.

contact Anxiety (p.185) 2) confronting/dealing with resistance (p.192) 3) Working in enchanted territory (p.182). At the same time we must also accept that "systematic reflection is a learned activity" (Sch�n, 1087:160). Reflexive writing on the field of qualitative research is a field of professional activity a point also made by Janesick (1998). She views journal writing as 'a type of Connoisseurship by which individuals become connoisseurs of their own thinking and reflection patterns and indeed their own understanding of their work' (p. 3) and argues that journal writing is 'a tangible way to evaluate our experience, improve and clarify One's thinking, and finally become a better . . . scholar'. Conclusion From this overview it should be clear that rather than providing a conventional report on a piece of research, this paper explores processes central to doing research & to developing as a researcher which Lisa has clearly evolved into & making her no longer a novice. I believe that Lisa has done a fairly good job in data analysis by representing and identifying extracts that were significant in some way, which helped me to develop a level of personal significance In addition, discrepancies or proximities of age, ethnicity, socioeconomic status, and gender all influence and, to a degree, predetermine the relationship of interviewer and interviewee. These factors shape what is asked and how stories are told. ...read more.