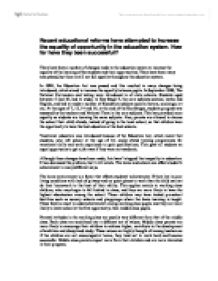 Recent educational reforms have attempted to increase the equality of opportunity in the education system. How far have they been successful?

Recent educational reforms have attempted to increase the equality of opportunity in the education system. How far have they been successful? There have been a number of changes made to the education system to increase the equality of the learning of the students and their opportunities. There have been many acts passed, but there is still not full equality throughout the education system. In 1988, the Education Act was passed and this resulted in many changes being introduced, which aimed to increase the equality between pupils. In September 1989, The National Curriculum and testing were introduced in all state schools. Students aged between 5 and 16, had to study, to Key Stage 3, the core subjects-science, maths and English, and had to study a number of foundation subjects such as history, sociology, art etc. At the ages of 7, 11, 14 and 16, at the end of the Key Stages, students progress was assessed by the teachers and National Tests in the core subjects. This has provided more equality as students are learning the same subjects. ...read more.

These values are highly thought of among teachers as if the children are not encouraged at home, they tend not to work hard and become successful. Middle class parents expect more from their children and are more interested in their progress. Cultural deprivation is another reason for the underachievement of pupils. Middle class families are more likely to go out to the museum or the library as this will encourage interest in learning and will introduce children to key elements of general knowledge and research skills more quickly. The middle class home tends to have books, CD-ROM's and educational toys. The working class child is less likely to receive this kind of upbringing. At school, teachers can affect a child's achievement by making judgements and classifying the students. If for example, a student behaves well, the teacher is more likely to label them as 'intelligent', whereas a badly behaved student is more likely to be labelled negatively. This is called the 'halo effect'. This can result in the teacher concentrating more on the bright pupils and making them achieve higher. ...read more.

This may be a result of the home background and social class. For many ethnic groups, English is their second language and so find it harder to learn if they are not being taught in their original language. Parents of ethnic groups such as Indian and African-Caribbean, feel their children are underachieving in class as they are not English and so pay for extra tuition and send their children to Saturday schools. The parents also put a lot of pressure on their children to succeed. Other factors for children from ethnic backgrounds underachieving is that the subjects of the hidden curriculum may be biased. For example, History is taught from a European point of view. Also, the teacher and other students may be racist and hold racist attitudes. Students from different ethnic backgrounds may experience discrimination within streaming and entering into lower-level papers in exams. Black people can be made to feel rejected in class, and so this may lead to the student not achieving their full potential. There is also a lack of black teachers. As well as this, they are less likely to be in positions of importance. This can affect the school experiences of ethnic minority students. ...read more.