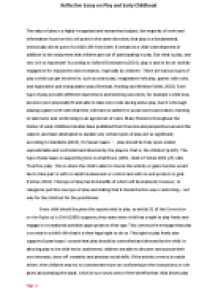 ﻿Reflective Essay on Play and Early Childhood The value of play is a highly recognised and researched subject, the majority of work and information found on this will point in the same direction; that play is a fundamental, intrinsically driven part of a child?s life from birth. It enhances a child?s development in addition to the enjoyment that children get out of participating in play. But what is play, and why is it so important? According to Oxford Dictionaries (2014), play is said to be an ?activity engaged in for enjoyment and recreation, especially by children?. There are various types of play a child can get involved in, such as active play, imaginative/role play, games with rules, and explorative and manipulative play (Sheridan, Harding and Meldon-Smith, 2002). Each type of play provides different experiences and learning outcomes; for example a child may become more physcially fit and able to take more risks during active play, but it is through playing a game with rules that they will learn to adhere to social norms and values, learning to take turns and conforming to an agreed set of rules. Many Pioneers throughout the history of early childhood studies have published their theories and perspectives around the subject, and have attempted to explain why certain types of play are so significant; according to Giardiello (2013), for Susan Isaacs: ??play should be truly open-ended, unpredictable and controlled and directed by the players- that is, the children?(p.120). The type of play Isaacs is supporting here is what Bruce (1991, cited in Forbes 2004 p.5) calls ?free flow play?. This is where the child is able to choose the activity or game he/she would like to take part in with no adult involvement or control and with no end product or goal. (Forbes, 2004). This type of play has its benefits of which will be explored; however, to categorise just this one type of play and stating that it should be this way is restricting ? not only for the child but for the practitioner. ...read more.

(Sheridan, Harding and Smith, 2002) Outdoor play is very potent in early childhood settings, in the Development Matters guidance material, it would fall under ?enabling environment? (Early Education, 2012), as the outside world has endless possibilities in terms of space and materials, a child may run around and develop their gross motor skills or they may craft using natural materials ?Arrange flexible indoor and outdoor space and resources where children can explore, build, move and role play.? (Early Education, 2012 p. 6) A child could even lay back and listen to sounds, or observe their surroundings, having fun but also learning about their world . It was Rousseau (cited in Wellhousen, 2002) who first suggested that children would learn better from a natural environment rather than a classroom, although it was Pestalozzi and Froebel who were the leading pioneers in implementing the outdoor aspect of play. Pestalozzi advocated children taking walks through nature so that they can observe and understand their natural settings, which would allow them to learn more about plants and animals etc. (Wellhousen, 2002) Imaginitive play or role playing is one other way a child can have fun and learn. In this, a child may become someone else, or imagine something whilst playing that is not real. This is a child?s fantasy world, somewhere he/she can make sense of their thoughts and perceptions of the world around them. For example when he/she dresses up as a doctor, they are able to become this role and understand more about them. Maybe a child might face their fears during imaginative play, they might pretend something is happening that they would usually be afraid of, but because it is pretend they don?t have to worry about it coming true. (Gordon, ND). Role playing can be initiated by the adult also, for instance in a puppet show where to adult is telling a story and the child might perhaps create the characters and get involved in the show. ...read more.

At first, Susan Isaacs? idea that play should be ?open ended, unpredictable?. controlled by the players? children? (Giadiello, 2013) seemed almost constricting, and blind to the significance of various other ways of playing. However, after exploring the depths of play including research, reports, history, and philosophies I realise that they all denote the same, if not a similar message. That children should direct and lead the way during play; that the adult is merely a tool for allowing further progression, this could be through supervising for safety reasons, playing a role in their drama, building blocks with them or encouraging some learning during the process. It seems to be agreed that if you do not categorise play into sections, you can see a bigger picture. Some categories will merge and aid each other, role play can happen outdoors, games with rules can involve some imagination should the children wish to invent a game. There is flexibility in how the child wishes to use them. It is said to be imperative that the relationship of adult to child remains as observer ? player so that we can notice what the child is particularly interested in, what they might need to develop on, what they are good at. Although the reasons a child may not get the opportunity to play have been acknowledged, it is said that no child should have their right to play taken away from them. This is where as a parent, teach, practitioner or relative, the adult plays instrumental role, providing the right environment and materials for young people to play. In conclusion, directed activities are too much like work, children do not want to work, it is in their nature to play, ?The imperative to play appears to be a universal characteristic of early childhood within different countries and societies'. Furthermore, children should be prioritised during playful activities, allowing them to direct the scenario; it may also be creative and unpredictable, it may or may not have an end goal but it will definitely be fun and worthwhile. ...read more.