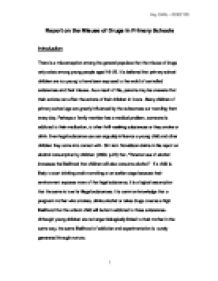 Report on the Misuse of Drugs in Primary Schools

Report on the Misuse of Drugs in Primary Schools Introduction There is a misconception among the general populace that the misuse of drugs only exists among young people aged 16-25. It is believed that primary school children are too young to have been exposed to the world of controlled substances and their misuse. As a result of this, parents may be unaware that their actions can affect the actions of their children in future. Many children of primary school age are greatly influenced by the substances surrounding them every day. Perhaps a family member has a medical problem, someone is addicted to their medication, to other thrill-seeking substances or they smoke or drink. Even legal substance use can arguably influence a young child and other children they come into contact with. Sir Liam Donaldson claims in his report on alcohol consumption by children (2009, p.23) that, "Parental use of alcohol increases the likelihood that children will also consume alcohol." If a child is likely to start drinking and/or smoking at an earlier stage because their environment exposes more of that legal substance, it is a logical assumption that the same is true for illegal substances. It is common knowledge that a pregnant mother who smokes, drinks alcohol or takes drugs creates a high likelihood that the unborn child will be born addicted to those substances. ...read more.

Perhaps the education for the prevention of substance misuse does not put enough emphasis on the illegality of the use of alcohol and tobacco by people under 18 years of age. Perhaps there is not enough emphasis on the danger these substances can cause to the young, developing body. Also an influence on children's substance misuse is a child's home environment. Research has shown that children who come from broken homes and "Looked After Children are more likely to be exposed to substance misuse than are other young people" (NATIONAL ASSEMBLY FOR WALES, 2002). Easy access to drugs, alcohol and tobacco increases the likelihood of children starting to misuse the substances earlier in life. Finally, an important issue of drug misuse by primary school children is the effect it has on their own and other children's futures. Children influenced by family and friends' misuse of substances and misusing substances themselves experience repercussions on their own education and their future relationships: Initiation of drinking prior to age 14 has been shown to be associated with a number of risk factors including having experienced alcohol-related injuries, involvement in violent behaviours and suicide ideation and attempts. Early onset of drinking is also associated with having more sexual partners and pregnancy, other substance abuse, employment problems and risky driving behaviours. ...read more.

The theory being that seeing the films and photographs of the consequences will discourage all curiosity to experiment. However, Emmeett and Nice (2008, p.12) argue that children are interested by the approach and that "in some cases this fascination may even have led directly to experimentation". Therefore education needs to be carefully and frequently reviewed as to whether the intended results are what have been achieved along with children's future intentions and attitudes. Conclusion * Children today are getting involved in the misuse of substances from an increasingly younger age. * Statistics show how adults can be very mistaken about the experiences of primary school aged children. The common misconception that younger children do not come into contact with substances leads to the lack of attention paid to the situation which could escalate it. * Education is given on substance use and the risks it involves, however, drug education in the primary school needs to be developed and increased. Further education needs to be more available to parents and teachers for supporting their child and ensuring their well-being as far as possible. * While some substances are very accessible, greater awareness in communities could serve to restrict young children from acquiring them so easily. * The less children that are influenced by and exposed to frequent substance use or misuse and instead correctly and sensitively educated, the more children will reach their teenage years with the knowledge, skills and understanding to face the decisions they are certain to encounter. ...read more.