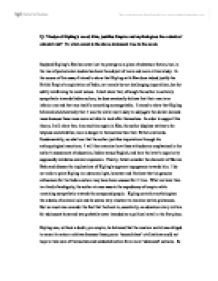 &quot;Rudyard Kipling's novel, Kim, justifies Empire and mythologizes the ordeals of colonial rule&quot; To what extent is the above statement true in the novel.

Q. "Rudyard Kipling's novel, Kim, justifies Empire and mythologizes the ordeals of colonial rule" To what extent is the above statement true in the novel. Rudyard Kipling's Kim has never lost its prestige as a piece of adventure fiction, but, in the rise of postcolonial studies has been the subject of more and more critical study. In the course of this essay I intend to show that Kipling with Kim does indeed justify the British Empire's exploitation of India; not merely by not challenging imperialism, but by subtly reinforcing its racist values. I shall show that, although the author is certainly sympathetic towards Indian culture, he does eventually believe that their race is an inferior one and that race itself is something nonnegotiable. I intend to show that Kipling believed wholeheartedly that it was the white man's duty to subjugate the darker skinned races because these races were not able to look after themselves. In order to support this theory, I will show that, time and time again in Kim, the author displays natives to be helpless and childlike; more a danger to themselves than their British overlords. Fundamentally, we shall see that the author justifies imperialism through his anthropological assertions. I will then examine how these attitudes are emphasized in the author's assessment of education, Indian versus English, and how the latter's superiority supposedly validates colonial expansion. Finally, I shall consider the character of Hurree Babu and discuss the implications of Kipling's apparent repugnance towards him. I do not wish to paint Kipling in a demonic light, however and I believe that his genuine enthusiasm for the Indian culture may have been unusual for it time. What we have then is a kind of ambiguity, the author at once asserts the expediency of empire while remaining sympathetic towards the conquered people. Kipling certainly mythologizes the ordeals of colonial rule and he seems very reluctant to examine native grievances. ...read more.

To an extent , Kipling's book does mythologize the ordeals of colonial rule. Indian dissatisfaction with British rule is almost completely absent; this is remarkable seeing as how nationalist feelings had been rising ever since the Indian Mutiny of 1857. We are shown a drunken Indian's anger towards the British Rajah because it "had forced upon him a white man's education and neglected to supply him with a white man's salary. He babbled tales of oppression and wrong till the tears ran down his cheeks for the miseries of his land" (Kim 234), but then we have this same Indian apologising and rescinding his words only a little later. But neither is Kipling na�ve in his certainty of British conduct overseas nor foolhardy in its advertisement. By comparison we should look at William Arnold's Oakfield (1853) which was a lengthy novel detailing the absolute integrity and moral conduct of the East Indian Trading Company's employees abroad. Moreover, the novel deals almost purely with Englishmen, leaving to the Indians themselves only dark and crooked caricatures (Something like Conrad's "whirl of black limbs"). In Oakfield India itself really only serves to corrupt the sincere motives of the white man, at least Kipling shows India to be a place of profit for little Kim, even if only so far as in it allows him to be a good Sahib. The Indians themselves in Kim are brightly narrated, we have the passive and peaceful Teshoo lama, the cunning and courageous Mahbub Ali and the blundering Babu Hurree Chander. In fact, even when Fr. Victor talks disparagingly of India with "Powers of Darkness below, what a country! . . . It's O'Hara's boy, sure enough. O'Hara's boy leagued with all the Powers of Darkness." (Kim 86) we feel sure that the author is showing us the characters ignorance and na�vet�. In E.M. Forrester's Passage to India, Mr Turton asserts "I have never known anything but disaster result when English people and Indians attempt to be intimate socially" (Forrester 182), ...read more.

servant and it is always clear that despite their significant age gap, the Babu is subordinate to Kim and always will be. Kim's bigoted manners are perhaps cute as a child but as Douglas Kerr mentions in his article about the text, "It is difficult to imagine an adult Kim in British India who would not be a diminished figure, as well as a less charming one" ('Kim' 2002). It is interesting to compare Kipling's portrayal of the Babu with the actions of the Priest of Dungara in Kipling's 'The Judgment of Dungara' (collected in The Man Who Would Be King 1987). The priest contributes some white woven shirts to a Christian mission, only these shirt have been woven with nettles. The priest then is sabotaging the mission believing perhaps that it is a waste of time to convert the natives in the first place. Kim then remains as a jingoistic product of its era despite its humanist sentiments and we might speculate that it represents a struggle between Kipling's theoretical beliefs on the one hand and his actual experiences in India on the other. Whether or not Kim really is a pejorative text is open to debate, we certainly see an energetic enthusiasm for all things Indian on every page of the text and often find surprising humanistic motifs. For example Kim and the Lama, despite the racial distinction Kipling emphatically makes, are remarkably similar. Neither has any family so to speak and their quests are both beyond the calling of ordinary men. Thus the Lama on his typically eastern quest and Kim in his work for the British Secret Service are shown not to be wholly different. Kim learns to employ both western and eastern reasoning and is shown to benefit from this alliance. Nevertheless, I maintain that Kipling's view as expounded in The White Mans Burden is apparent in Kim and that he does believe the white man has a duty to lead and 'protect' the Indians which he has conquered. ...read more.